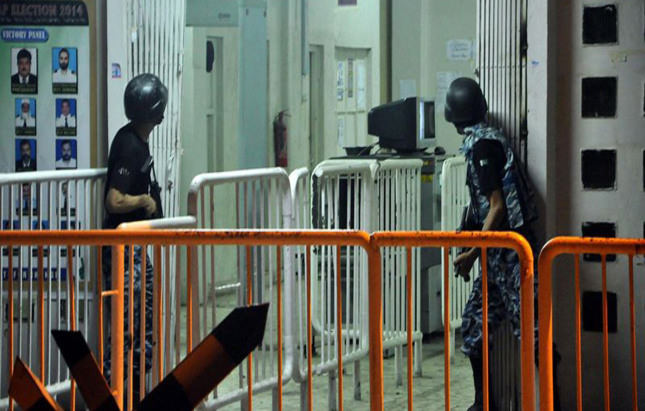 Death toll in attack at Karachi, Pakistan, airport said to be 17, including 7 militants

The airport attack still was ongoing early Monday in Karachi, a sprawling port city on the southern coast of Pakistan, although officials said all the passengers had been evacuated. Heavy gunfire and at least two large explosions could be heard coming from the terminal at Jinnah International Airport as authorities scrambled to secure the area.


Dr. Seemi Jamali from Jinnah Hospital in Karachi said 17 bodies had been brought so far to the hospital from the fighting. She said eight were from the Airport Security Force personnel, one was an employee of the Civil Aviation Authority and another was from the state-run Pakistan International Airlines.

Gunmen attacked the terminal late Sunday, said Shaukat Jamal, a spokesman for the Airport Security Force, an arm of the country's police. A major fire rose from the airport, with the silhouette of jets seen.

Jamal said the Pakistani military had been called in and that police were fighting the attackers.

The attack happened at a terminal not generally used for commercial flights but for special VIP flights and for cargo.

"I was working at my office when I heard big blasts several blasts and then there were heavy gunshots," Sarmad Hussain, a PIA employee, told The Associated Press after escaping the building. He said he and a colleague jumped out of a window to get away, and his colleague broke his leg.

When Hussain came out of the building, he said he saw smoke billowing from the terminal.

Jamal, the ASF official, said army commandos confined the attackers to a maintenance area, and that they hadn't been able to get onto the tarmac.

Jamal said the police and army commandos were still fighting with the attackers. He said he was not sure how many attackers there were nor whether any of them had been killed.

An official who spoke to journalists near the airport said at least some of the militants were wearing Airport Security Force uniforms and all were strapped with explosives. He said one of them tried to capture a vehicle used by the Civil Aviation Authority and when a guard shot at him, the explosives strapped to his body went off. The official said another attacker also blew up after being shot at by security forces.

He said he had seen the bodies of three attackers and that an additional three or four attackers were believed to be alive. The official described himself as being with one of the country's intelligence agencies but declined to give his name.

The country's military said in a statement that all the passengers had been evacuated and that three gunmen had been killed.

At least two domestic flights have been diverted and all flight operations had been suspended at the airport. A spokesman for the Civil Aviation Authority said the airport would be closed until at least Monday night.

Karachi is Pakistan's largest city and has been the site of frequent militant attacks in the past. It is the country's economic heart and any militant activity targeting the airport likely would strike a heavy blow at foreign investment in the country.

In May 2011, militants waged an 18-hour siege at a naval base in Karachi, killing 10 people in an assault that deeply embarrassed its armed forces.

There was no immediate claim of responsibility for Sunday night's attack. Pakistan's government has been trying to negotiate a peace deal with local Taliban fighters and other militants mostly based in the northwest who have been waging war against the government. But the talks have had little success, raising fears of a backlash of attacks across the country.

Security officials in Karachi had feared that if the talks broke down, their city would be a likely spot for militant groups to strike back as the Pakistani Taliban and their allies increasingly have gained a foothold in the city in recent years.

In the suicide bombing, four bombers targeted Shiite pilgrims staying at a hotel in the town of Tuftan near the Iranian border, said Baluchistan province Home Minister Mir Sarfraz Bugti. One bomber was killed by security officials traveling with the pilgrims, but the other three managed to get inside the hotel where they blew themselves up in an attack that also wounded 10 people, he said.

It wasn't immediately clear whether there was a connection between the airport assault and the Baluchistan attack.