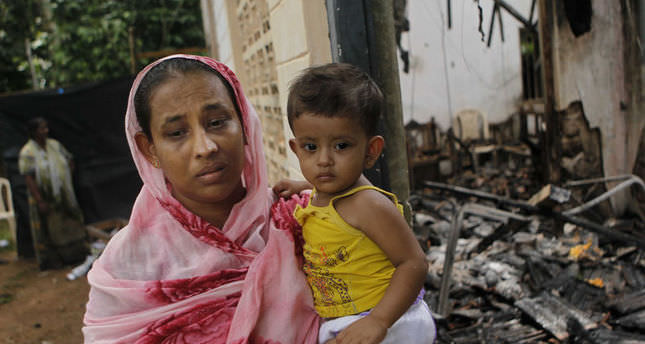 by Jun 18, 2014 12:00 am
The main Muslim party in Sri Lanka's ruling coalition Wednesday demanded a UN probe into one of the country's worst-ever religious riots, as President Mahinda Rajapakse toured the violence-hit resort region.

The Sri Lanka Muslim Congress (SLMC) said it was also boycotting parliament Wednesday as a protest against Colombo's failure to rein in a hardline Buddhist group widely accused of sparking the clashes.

"We are convinced that the government did not do anything to prevent the violence against the Muslims," said Hakeem, who is the most senior Muslim in Rajapakse's cabinet.

Rajapakse, who was visiting Bolivia when the violence broke out, travelled to the resort region of Beruwala shortly after his return to the island and met local community leaders from both sides.

Hundreds of troops were deployed to help police after the extremist Buddhist Force, or BBS, marched in neighbouring Alutgama on Sunday, with clashes breaking out as it claimed its procession was stoned by Muslims.

At least four people were killed and nearly 80 seriously wounded, while dozens of homes, businesses and vehicles were torched, with violence spreading to Beruwala on Monday.

The attacks are the latest in a series of religious clashes to hit Sri Lanka following unrest in January and last year, when Buddhist mobs attacked a mosque in the capital Colombo.

Muslims make up about 10 percent of the 20 million population, but are accused by nationalists of having undue influence in the Buddhist-majority country.

The United States has led international condemnation of the violence, while Western embassies in Colombo have advised nationals holidaying in the area to stay indoors.