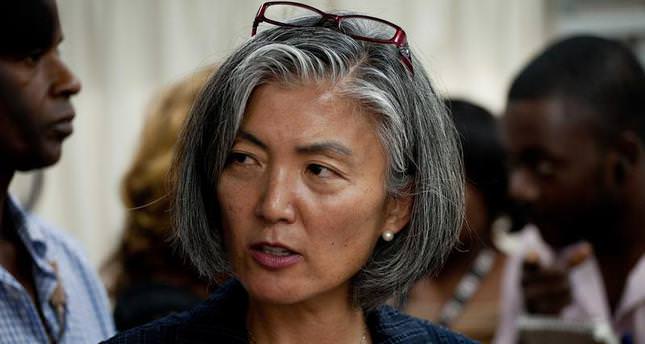 by Daily Sabah Jun 19, 2014 12:00 am
The U.N.'s Deputy Emergency Relief Coordinator Kyung-Wha Kang pointed out in a press conference on Tuesday in New York that humanitarian conditions have been deteriorating for about 140,000 stateless Rohingya Muslims, who have been living in camps in Myanmar since ethnic violence broke out in 2012. Kang stated that human suffering in displacement camps has reached a level "never seen before, with men, women, and children living in appalling conditions with severe restrictions on their freedom of movement, both in camps and isolated villages." "I have to say the conditions for Muslims in the IDP (internal displaced persons) camps were far worse," said Kyung-Wha Kang.

She also added that they are in dire need of "life-saving assistance", as the people living in camps do not have any access to very basic needs including water, sanitation, health and education. She also stated that 95 percent of all internal displacements in Myanmar's western state of Rakhine area were endured by the Muslim population, according to U.N. reports. According to the Human Rights Watch 2014 report on Myanmar, serious human rights violations are continuing in ethnic areas. Communal violence against Muslim communities in central Burma was also reported "with a series of apparently coordinated attacks against Muslim communities and properties." Rising anti-Muslim violence and hate speech towards the Muslim population is being spread by nationalist Buddhist monks who urge Buddhists to boycott Muslim businesses and avoid marrying Muslims and converting to Islam. The Rohingya, a Muslim ethnic group, are not recognized among the 134 official ethnicities of the country and the U.N. considers them as one of the most persecuted minorities in the world. This is due to the fact that the government authorities see them as illegal immigrants from neighboring Bangladesh, despite many families having lived in Burma for generations, they are not recognized as citizen of Mynamar, making them a stateless Muslim community.

Their living conditions are getting much worse as displaced Rohingya Muslims have long been struggling with persecution and growing Buddhist resentment, which was sparked after the alleged killing of a young Buddhist woman by Rohingya men. As they have no permission to leave the camps, most are unemployed without having a source of income and they rely on the World Food Program to survive. The unrest in Myanmar which began in 2012 has resulted in the loss of many Muslim lives.

About 140,000 stateless Rohingya Muslims were obliged to be internally displaced due to the increasing number of violent attacks by Buddhists.
With regard to the 1969 movement, which led to the spread of violence against Muslims in the country, many were forced to live in camps with poor living conditions. As Myanmar's Buddhist-Rohingya ethnic divide has escalated, the reports show that many Rohingyas are seeking refuge in
neighboring countries Thailand and Bangladesh.
Last Update: Jun 19, 2014 1:01 am
RELATED TOPICS