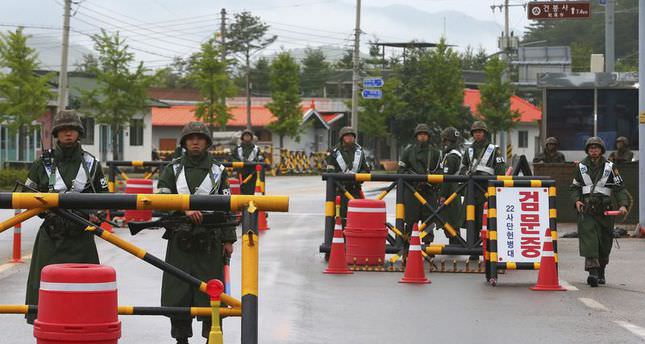 by Jun 22, 2014 12:00 am
South Korean troops were engaged in a shootout on Sunday with a conscript soldier who had killed five comrades in a grenade and gun attack the previous night, media reports said.

The soldier opened fire on troops after they tracked him down near a school in the Goseong region close to the border with North Korea, YTN television news reported.

A platoon leader was wounded in the arm during shootout, and 'shoot to kill' orders were given unless the fugitive soldier surrenders, YTN reported, citing military officials.

Yonhap news agency reported that the soldier had been surrounded and his parents had been taken to the site, where his mother pleaded with him to surrender.

The soldier, identified by Yonhap news agency as Sergeant Lim, shot dead five of his fellow unit members and wounded seven others late on

Saturday at an outpost in the base at Goseong county, a mountainous region that borders the North on the eastern coast of the peninsula.

The number of military personnel involved in the search was the equivalent of nine battalions, a colonel with the Army's Eighth Corps told a media briefing.