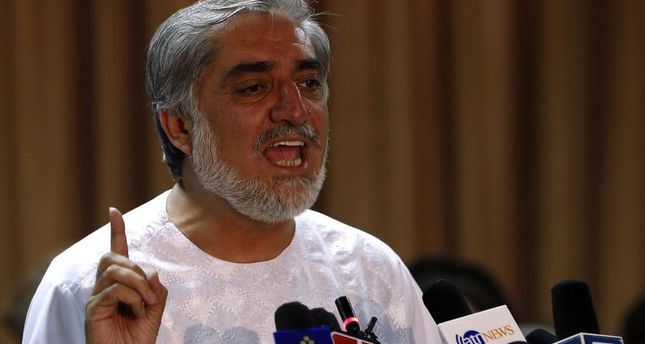 by Jul 08, 2014 12:00 am
Thousands of supporters of Afghan presidential candidate Abdullah Abdullah rallied in central Kabul on Tuesday in a gesture of defiance after his rival, Ashraf Ghani, was declared the winner of last month's run-off vote.

Preliminary results showed that Ghani, a former World Bank official, won the June 14 second round, but Abdullah rejected the outcome, saying the vote was marred by widespread fraud.

Observers fear that a standoff between Abdullah and Ghani could plunge Afghanistan into disorder, with no clear leader in a country already beset by deep-rooted ethnic divisions.

Abdullah has accused President Hamid Karzai, who is stepping down after 12 years in power, of helping rig the vote in favour of Ghani, describing it as a "coup" against the people.

In a noisy protest, crowds of Abdullah supporters gathered in a giant tent in the center of the capital Kabul, chanting "Death to Karzai", tearing down a large portrait of the outgoing leader and replacing it with an image of Abdullah.

In a tense atmosphere, Abdullah, a former anti-Taliban resistance righter, was due to address the crowd later in the day.

Abdullah draws his support mostly from the Tajik minority in northern Afghanistan where many senior posts are filled with his allies, whereas Ghani is backed mainly by Pashtun tribes in the south and east of the country.

Some Abdullah supporters have suggested his camp should declare victory and form a parallel government, a dangerous move that would further fracture the fragile country.

Away from the city's center, dozens of Abdullah supporters tore down another Karzai portrait at Kabul's international airport.

In a sharp statement, U.S. Secretary of State John Kerry warned Afghanistan that any attempt to take power illegally following the disputed election would cost it U.S. support.

"I have noted reports of protests in Afghanistan and of suggestions of a 'parallel government' with the gravest concern," he said in a statement issued by the U.S. embassy in Kabul.

"Any action to take power by extra-legal means will cost Afghanistan the financial and security support of the United States and the international community."

The Afghan government is heavily reliant on foreign donors to fund everything from building roads and paying school teachers to security. The United States pays the lion's share of all international aid.


The deadlock over the vote has quashed hopes for a smooth transition of power in Afghanistan, a concern for the West as most U.S.-led forces withdraw from the country this year.

The Independent Election Commission announced on Monday that Ghani won the second round with 56.44 percent of the vote, according to preliminary results. The tally might change when the final official numbers come out on July 22.