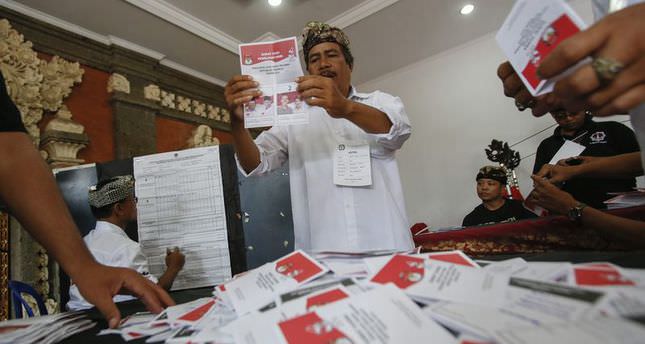 by AA Jul 09, 2014 12:00 am
Confusion reigned in the Indonesian presidential election Wednesday with both candidates claiming victory on the back of different "quick counts" which showed each ahead of his rival.

The standoff is unprecedented in Indonesia. In the country's two previous presidential elections the winner - Susilo Bambang Yudhoyono - won by a clear margin.

Both Washington-based think tank the Centre for Strategic and International Studies (CSIS) and Jakarta-based pollster Indonesian Survey Institute (ISI) said Joko "Jokowi" Widodo had won, according to random selections of the around 188 million votes recorded at polling stations nationwide.

Meanwhile, another Jakarta-based poll, Puskaptis, had Subianto in the lead with 52.05 percent compared to Jokowi's 47.95.

With 75 percent of the sample counted, Jokowi had told reporters in the country's capital Jakarta: "All of us can be grateful that based on the quick counts up to now, Jokowi-JK are winning."

JK are the initials of Jokowi's running mate and vice-presidential nominee Jusuf Kalla.

"I ask all Indonesian people to protect the people's will and make sure no one tries to taint the aspirations of the people," he added.

Subianto later claimed the same: "We are grateful for all the incoming information that indicates that the Number 1 pair [Subianto and his running mate Hatta Rajasa were listed Number 1 on the voting sheet] have the support and mandate from the people."

Outgoing President Yudhoyono - who steps down in October after reaching the legal two-term limit - held a press conference Wednesday, stating that he hoped the differences in opinion didn't lead to any violence or security problems.

"Although there are two different exit poll results, people have to remain calm, as the real result will be decided by the election commission," he said, instructing the "police and public to watch over the situation."

The coordinating minister for legal, political and security affairs asked both camps to remain calm.

"For both groups of supporters related with the split quick count results, we request they do not mobilize their supporters excessively," said Djoko Suyanto.

Authorities said that around 250,000 police officers were on standby across the country, but at 7pm local time - 6 hours after the polls closed - there had been no reports of any major violence.

The real count will be declared by the commission July 22.