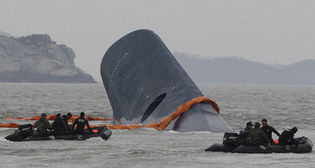 by AA Jul 14, 2014 12:00 am
Family members left grieving after losing loved ones in the Sewol ferry disaster off South Korea's coast began a hunger strike Monday - the 15 relatives calling for justice months after the vessel sank leaving more than 300 dead or missing.

An official investigation has already found fault in the government and the ship's operator for failing to prioritize the safety of passengers-while the Sewol's captain and steering crew are on trial facing multiple charges, including murder.

The evacuation of the ferry's passengers, mostly South Korean high school students on a trip from the northwestern port city of Incheon to Jeju Island on April 16, had been delayed as they were initially told to remain where they were.

Subsequent claims of overloading the vessel and other allegations of corruption led to a manhunt for the suspect widely reported to be the Sewol's de facto owner-73-year-old Yoo Byung-eun.

While Yoo remains at large despite a nearly $500,000 reward being offered for his whereabouts, relatives of the tragedy's victims have turned their anger towards South Korea's politicians.

Dozens of family members had been joined by around 1,000 civic activists in holding a protest Saturday in capital Seoul.

They specifically called for the enactment of a special law aimed at uncovering the cause of the disaster.

On Monday, a group representing the families held a press conference in front of the country's political center - the National Assembly - to announce that 15 relatives had gone on hunger strike in front of the assembly itself and at Gwanghwamun Square, an iconic plaza in central Seoul.

They again called for the law in question to be enacted by July 24-which will mark 100 days since the disaster.

Although rival political parties based at the assembly have already agreed to enact the law, they continue to be locked in a dispute over its finer points-raising concerns that they will fail to make progress by the end of the current parliamentary session on July 17.

Meanwhile, the search goes on for missing victims near South Korea's southwestern coastline, with 11 still unaccounted for and a confirmed death toll of 293.