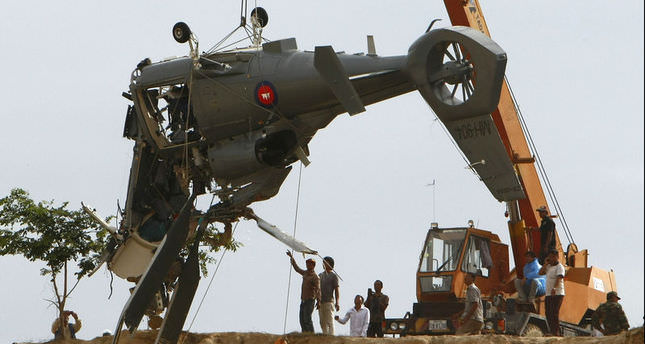 by AA Jul 14, 2014 12:00 am
At least four people were killed and another injured when a Cambodian military helicopter crashed Monday morning near capital Phnom Penh, local media reported.

An air force deputy commander and three soldiers were killed in the crash that occurred in a quarry, The Cambodia Daily reported. The surviving soldier is hospitalized but in stable condition.

"Four died and one was injured," the daily quoted air force commander General Soeng Samnang as saying. "Among the four dead is a deputy commander."

The cause of the crash remained unclear Monday evening, but The Phnom Penh Post reported that the accident had occurred during a routine training exercise.

The paper quoted Chhay Bonna, director of Phnom Penh airport, as saying, "They conduct training every day, but there was a problem today."

The helicopter is believed to be one of twelve bought by the Cambodian government from China last year with a $200 million loan. The purchase was criticized at the time as over-spending on defense amid the need for funding for health care and education in the country.

China and Cambodia have a close relationship and Cambodia has been accused of backing China in regional territorial concerns in return for loans and investment. Unlike loans from other donor countries, China's no-strings attached policy regarding human rights abuses makes it a popular choice for the Cambodian government.

According to a report prepared for the U.S. Congress last July, "Many analysts argue that Chinese assistance has significantly reduced the effectiveness of other aid donors attempting to pressure Cambodia to make advances in the areas of rule of law, democracy and human rights."