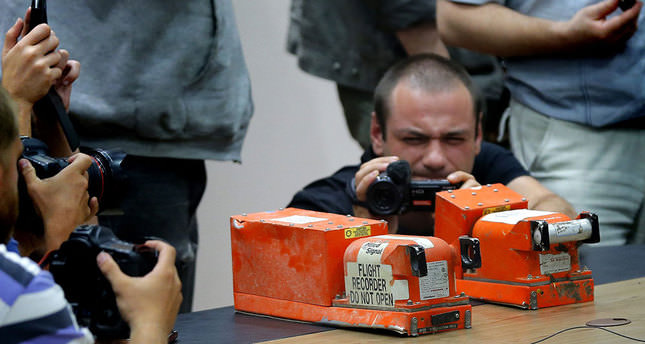 by AA Jul 22, 2014 12:00 am
After days' of allegations that flight MH17's black boxes were being tampered with by a pro-Russia separatist group, Malaysia's prime minister said Tuesday that they had been handed to his investigation team and they appeared to be in a good condition.

Najib Razak said in a statement that the flight recorders retrieved from the crash site of the Malaysia Airlines plane will be held securely in Malaysian custody while an international investigation team is being formalized.

"At that time, we will pass the black boxes to the international investigation team for further analysis," Najib Razak said in a statement.

Flight MH17 crashed in the separatist-controlled Donetsk area of eastern Ukraine on Thursday, with most western countries accusing pro-Russia rebels of bringing it down.

Russia has denied the allegations, while rebel leader Alexander Borodai insisted late Tuesday night while handing the boxes over that he and his followers had nothing to do with the downing of MH17.

He blamed the Ukraine government, which he said had "both the technical ability and the motive" to bring it down.

Earlier Tuesday, Russia's ambassador to Malaysia reiterated that her country had no involvement in the plane's demise, accusing neighbor Ukraine of possessing a sophisticated missile launcher that is alleged to have brought down the plane.

"The rebels have no means to shoot down a civilian plane. They also do not have the weapon to do so," Lyudmila G. Vorobyeva told a packed news conference in Malaysia's capital Kuala Lumpur.

Reports had claimed that the rebels had tampered with the boxes and their contents, however after careful analysis Malaysian experts said that no such effort had taken place.

The premier also expressed relief in his statement that the first two conditions of an agreement struck with Borodai have been met - a train carrying remains of those on board MH17 arriving in Ukraine's capital Kharkhiv.

Razak said arrangements will be made to transport the remains to the Netherlands' capital Amsterdam, where the Kuala Lumpur bound flight had set off from.

"So far, the agreement has been honored. Malaysia requests that this co-operation continues, and that investigators are granted the full access to the site, which was agreed. I am relieved that we have been able to secure the breakthrough that has allowed us to move forward," he said.

Hundreds of people also marched towards the Russian and Ukrainian embassies in Kuala Lumpur Tuesday, demanding both governments take responsibility.

The protesters, mainly those from the ruling political party Barisan Nasional (BN), were all clad in black attire and carried banners stating "justice for MH17" and "Russia and Ukraine must answer to MH17 genocide".

Ibdillah Ishak - the United Malays National Organisation youth secretary - told the Anadolu Agency that Razak's efforts to have a backdoor conversation with the pro-Russian separatist group to retrieve the aircraft's black boxes had to be lauded, but it wasn't enough.

"Both governments must tell the whole world what really happened to MH17. The 298 people who lost their lives cannot just die without knowing reason," he said.