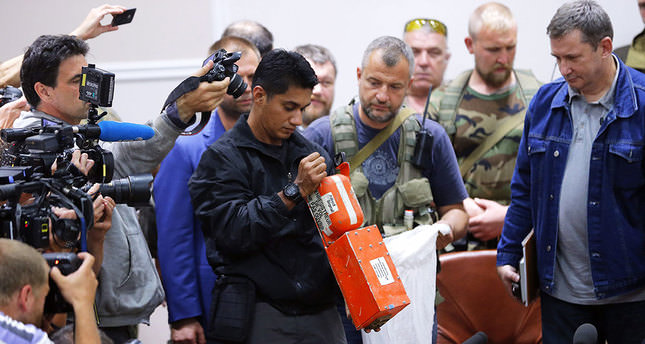 by AA Jul 22, 2014 12:00 am
In what was seen as a major breakthrough for Malaysian investigators, pro-Russian rebels in control of the crash site of Malaysia Airlines Flight MH17 have handed over the plane's two black boxes to a special Malaysian team in eastern Ukraine.

The boxes were handed over Tuesday by Alexander Borodai, leader of the self-proclaimed Donetsk People's Republic that holds power in the region, to Malaysian team leader Khairil Hilmi Mokhtar in Donetsk.

"We will take them [the black boxes and bodies] to the Netherlands before bringing them back home to Malaysia," Khairil Hilmi was quoted by Malaysian National News Agency as saying.

The Kuala Lumpur-bound flight from Amsterdam crashed Thursday afternoon close to Ukraine's tense border with Russia with 298 people – 283 passengers and 15 crew members - on board, including 193 Dutch citizens. There are no reports of any survivors.

Borodai met with the Malaysian delegation - comprised of 131 members of various government agencies who arrived in capital Kiev on Saturday - for more than two hours before handing over the black boxes.

He also dismissed all allegations regarding pro-Russian rebels' involvement in the suspected shooting of the Boeing 777 civilian aircraft.

At a packed press conference, the separatist leader said that Ukrainians possessed the technical capabilities and the motives to shoot down the plane. He also committed to a ceasefire around the crash site to assist investigations.

Since the plane came down, Ukraine and Russia have exchanged accusations as to who was responsible.

Early Tuesday morning, Malaysian Prime Minister Najib Razak told journalists that he had decided to be in direct contact with Borodai, with whose rebel group he had managed to strike a deal over necessary steps in the process.

He said all recovered passengers' bodies would be sent to the Netherlands for further investigations before being brought to Malaysia.

The victims' remains are currently on a train from Torez to northeastern Kharkiv, where representatives from the Netherlands will claim custody of them.

Najib explained that six Malaysian recovery team members would travel along with the bodies and black boxes.

"Following any necessary forensic work, the remains of Malaysian citizens will then be flown home to Malaysia," the premier said.

He urged all parties to cooperate in ensuring that the agreement be honored, the remains returned and the international team granted full access to the crash site.

"Only then can the investigation into MH17 truly begin. Only then can the victims be afforded the respect they deserve," Najib stressed. "We need to know what caused the plane to crash, and who was responsible for it, so that justice may be served."

He admitted that although there had been times since the tragedy when he had wanted to give greater voice to the anger and grief felt by Malaysians, he later realized that the country must work calmly for a better outcome.

"I understand that for the families, nothing can undo this damage," Najib added. "The lives taken cannot be given back, the dignity lost cannot be regained."