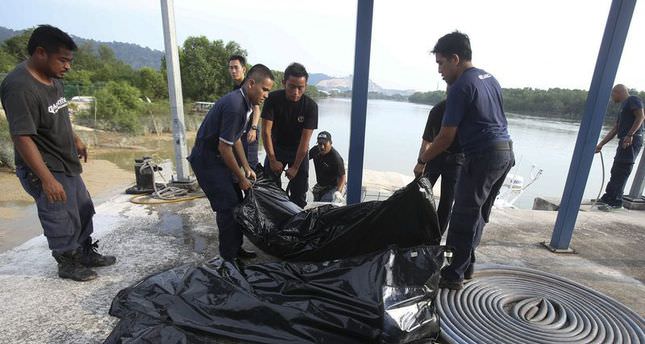 by AA Jul 25, 2014 12:00 am
At least three people have lost their lives after an overloaded boat carrying illegal Indonesian workers home for the Muslim Eid al-Fitr holiday sank off the southern coast of Malaysia.

The head of Malaysia's Maritime Enforcement Agency, Iskandar Ishak, was quoted by local media as saying Friday that the deaths occurred when a boat carrying 21 suspected migrants capsized Thursday morning in the territorial waters of southwest Johor state.

Local media reported that ten passengers had been rescued while eight others were declared missing.

"Sea and air search operations are underway in the Straits of Malacca with slightly choppy sea conditions," said Iskandar.

The vessel-which only had a capacity of eight people - was headed to Indonesia's Sumatra island when it was hit by strong waves.

Two weeks ago, a boat carrying around 80 Indonesians collided with a patrol vessel, engaged in an operation to prevent illegal workers from entering and leaving the country via unauthorized routes, off Johor's coast.

The issue of illegal workers has fueled tensions between the governments of the two countries, the Malaysian Home Ministry launching a large-scale operation to flush out illegal migrants January 21, where deportation costs would be borne by the migrants themselves, their employers or the missions of their countries.

Afraid of such tough penalties, migrants working illegally have been seeking to avoid land border crossings to travel back to their home countries.

Indonesians working abroad prefer to travel to their hometowns for Eid to celebrate with their families, make pilgrimages to the burial places of loved ones, and share their earnings with relatives and poor residents.

About 2 million Indonesians are believed to be working in Malaysia.