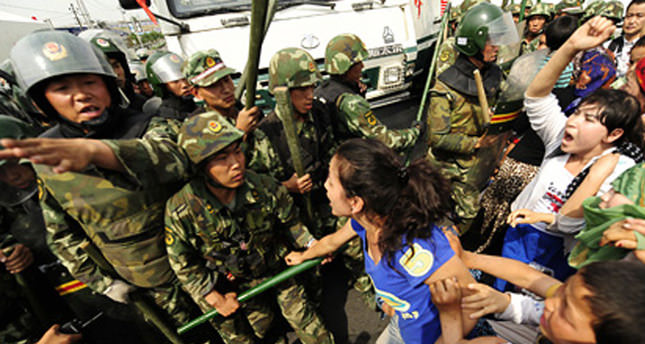 Chinese state media reported late Tuesday that dozens of civilians and assailants were killed and injured in what it described as a "terrorist attack" in the region, saying a gang armed with knives and axes had attacked a police station and government offices, before moving on to a township.

"Police officers at the scene shot dead dozens of members of the mob," official news agency Xinhua said of the violence, reported to have occurred early Monday.

Xinhua did not give a precise breakdown of the casualties, and information in Xinjiang is often difficult to verify independently.

But Dilxat Raxit, a spokesman for the World Uyghur Congress, an exile group, said the toll had climbed significantly.

Citing local Uighur sources, he said in an email, "Nearly 100 people were killed and wounded during the clash."

The violence came, he added, when "Uighurs rose up to resist China's extreme ruling policy and were met with armed repression resulting in dead and injured on both sides."

Raxit had earlier said more than 20 Uighurs were killed and 10 wounded, while a total of 13 armed Chinese personnel were killed or wounded and about 67 people were arrested.

The violence took place in Shache County, or Yarkant in the Uighur language, near the edge of the Taklamakan desert in the west of the vast region.

Hotel and restaurant staff in Shache contacted by AFP said they had no knowledge of the incident.

According to Xinhua, it was "organized and premeditated."

Beijing commonly blames separatists from Xinjiang for carrying out terror attacks that have grown in scale over the past year and spread outside the restive and resource-rich region.

Among the most shocking incidents was a market attack in Xinjiang's capital Urumqi in May in which 39 people were killed, and a deadly rampage by knife-wielding assailants at a train station at Kunming in China's southwest in March, which left 29 dead.

Rights groups and analysts accuse China's government of cultural and religious repression that they say fuels unrest in Xinjiang, which borders Central Asia.

The government, however, argues that it has boosted economic development in the area and that it upholds minority rights in a country with 56 recognized ethnic groups.

Beijing has also suggested that extremists in Xinjiang are influenced by radical groups outside China, though many foreign analysts are skeptical, pointing instead to Uighur dissatisfaction.