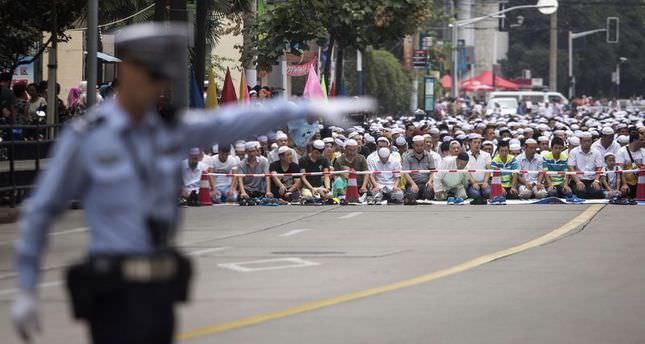 by AA Jul 31, 2014 12:00 am
Security has been tightened in China's far-western restive Xinjiang region after a mob is reported to have attacked a police station and government buildings earlier this week.

China's state news agency reported Tuesday that a gang had run riot in Elixku Township in Shache County - attacking civilians and smashing vehicles - some of them then moving on to the nearby Huangdi Township.

Xinhua said that dozens of Uighur - a Turkic-speaking Muslim ethnic minority group who have accused the Chinese government of human rights violations and discrimination - and Han civilians were killed or injured in the attack and police shot dozens of members of the mob.

The New York Times, however, reported this week that Uighur exile groups, citing sources in the region, had said that there was no mob, rather a group of protesters who had gathered outside government offices, only to be greeted with excessive force by police.

Rioting had later broken out across several rural townships in response to the police action, it said the groups had claimed.

The Uighur American Association said in a statement that 20 Uighurs were killed and at least 70 arrested during the incident, and condemned the "use of excessive state violence."

It said the residents were protesting against Beijing's "extra-judicial use of lethal force in recent weeks" and its "heavy-handed Ramadan crackdown."

The violence erupted on Monday-the last day of the Muslim Holy month, Ramadan. Xinjiang is a home to Uighur, which constitute around 45 percent of the population.

Analysts have said the ethnic group have been subject to religious, cultural and language restrictions, which have helped fuel demands for a separate state. The Chinese government imposed restrictions on the Uighur during Ramadan, banning government employees and children from fasting.

Human rights organizations and activists say such restrictions have sparked violence in the mineral and oil-rich province of Xinjiang for years.

China denies such accusations and launched a yearlong "anti-terrorism" campaign in May - focusing on Xinjiang - which will be in effect until June 2015.
Last Update: Jul 31, 2014 5:06 pm
RELATED TOPICS