120 missing in capsized ferry in Bangladesh 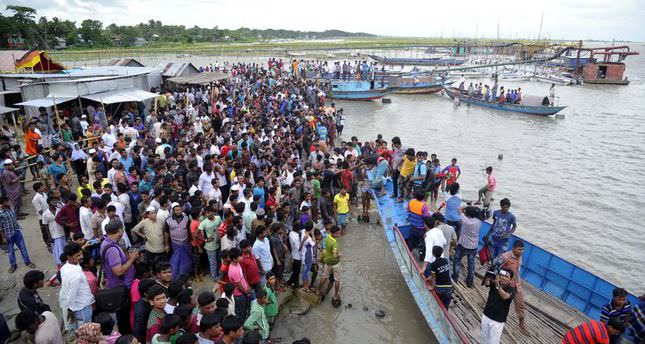 by Aug 05, 2014 12:00 am
Bangladeshi rescuers struggled against a strong current and choppy river waters on Tuesday in the search for a ferry that capsized with more than 200 passengers on board while Bangladesh's shipping minister says at least 125 people are presumed dead after a ferry capsized central Bangladesh.


Low-lying Bangladesh, with extensive inland waterways and slack safety standards, has an appalling record of ferry accidents, with casualties sometimes running into the hundreds.

Overcrowding is a common feature of many of the accidents, and each time the government vows to toughen regulations.

The ferry that sank on Monday, the MV Pinak-6, had a capacity to carry 85 passengers, according to the inland transport authority. It went over and sank in the Padma river about 30 km (18 miles) southwest of the capital, Dhaka.

"The navy rescue team started using sonar from this morning," said Mohammad Saiful Hasan Badal, deputy commissioner of the Munshiganj district, where the ferry went down.

But a strong current, deep, rough water and poor visibility were complicating the search, Saiful said.

Teams from the military, coastguard, Inland Water Transport Authority and the fire brigade had been pressed into the rescue effort, Saiful said.

About 100 passengers were rescued after the vessel sank, while two women taken to hospital had died. There was a possibility some of those on board had swum to the riverbank, Saiful told Reuters.

"We have recorded 120 passengers as missing, but it does not mean that all of them are dead," Saiful said. He later said rescuers had recovered two bodies some distance from the site of the sinking.

Shipping Minister Shajahan Khan ordered the arrest of the owner of the boat on suspicion of overloading and operating without proper authorisation.

Most passengers aboard the ferry were returning to Dhaka after the Eid al-Fitr festival at the end of the holy month of Ramadan, when many people in the predominantly Muslim nation return to their home villages.