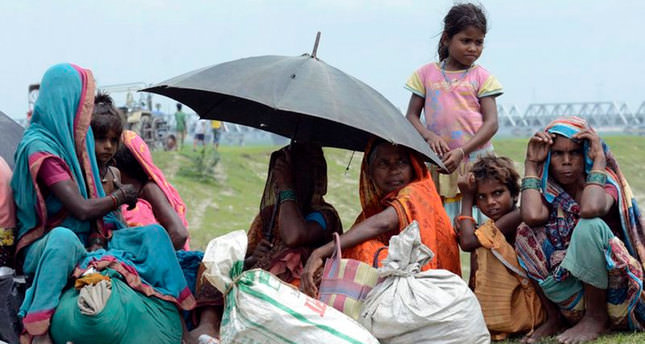 by Aug 16, 2014 12:00 am
Flash floods and mudslides following heavy rains have killed at least 53 people in Nepal over the past three days and cut off remote communities in the mountains, the government said on Saturday.

The landslides and flooding were triggered by annual monsoon rains since Wednesday, causing rain-soaked earth and rocks to crash down on homes while rivers swelled and washed away low-lying villages.

Nepal's Home Ministry said 75 people were unaccounted for and 36 others were in hospitals and medical centres.

It was not immediately clear if the missing people were trapped in their damaged homes, washed away by floods or out of contact due to snapped communication links, officials said.

Officials said more than 25 percent of Nepal's 75 administrative districts were hit by landslides or floods.

"More than 200 houses are destroyed while hundreds of other homes are completely under water," the government said.

About 3,500 people have been rescued and housed in school and community buildings, official Punnya Dhakal said.

In 2010, British climate consultancy Maplecroft rated mostly mountainous Nepal along with Bangladesh, India, Madagascar and Mozambique as among most vulnerable to climate change impact over the next 30 years.

Rains are crucial for impoverished Nepal, which depends on farming. But heavy downpours cause death and destruction every year.

Early this month, a massive landslide near Kathmandu buried a village and killed 156 people. It blocked the Sunkoshi River forming a dangerous build up of water prompting authorities in Bihar in east India to evacuate thousands on flood fears.