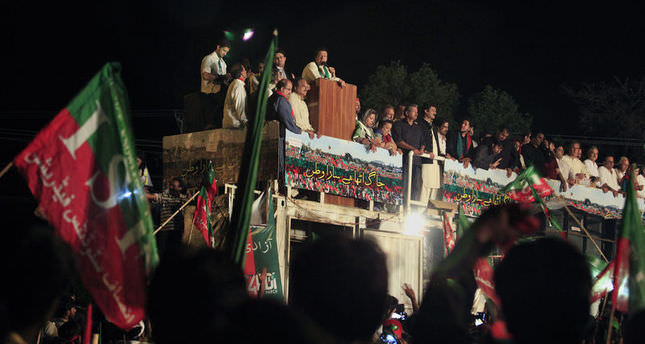 by Aug 18, 2014 12:00 am
Pakistani opposition leader Imran Khan and a cleric either ignored or rejected an offer of talks from Prime Minister Nawaz Sharif on Monday, the fourth day of anti-government protests in the capital.

Both former cricketer Khan and cleric Tahir ul-Qadri, who runs a network of Islamic schools and charities, have called for Sharif to quit, accusing him of corruption and ballot-rigging during his landslide election victory last year.

Khan's representatives did not respond to calls seeking comment on the government's offer. Qadri rejected it and called for his followers to stage more sit-ins in other cities.

So far, the protest turnout has been far below what Khan and Qadri had hoped for. Tens of thousands, not millions, have occupied two streets in Islamabad.

The government was setting up committees to negotiate with the protest leaders, lawmaker Marvi Memon from the ruling party said Monday. She laughed off suggestions negotiations might fail.

"I don't believe they will reject negotiation, because they would also like some kind of face-saving," she said.

The protests have sparked concerns over the fragility of democracy in the nuclear armed nation of 180 million. The military, fighting a Taliban insurgency, has not publicly commented on the protests.

Many Pakistani analysts believe Khan and Qadri mounted their parallel protest campaigns because they sensed Sharif's fraught relationship with his generals had nosedived in recent months.

Sharif's last term ended in a coup in 1999 and since taking office last year he has clashed with the military on several issues.

Many officers are unhappy that Pervez Musharraf, the army chief who ousted Sharif, is on trial for treason. They distrust Sharif's dovish stance towards rival India and were frustrated by delays over the launch of an anti-Taliban offensive.

But few think the military, which has ruled Pakistan for around half its 67-year history, wants a coup.

Police estimated the number of people participating in the two protests on Sunday at around 55,000, but the numbers wax and wane under the blazing summer sun.

Most of Khan's supporters spend the night at the homes of friends rather than camp out in the open. Although some roads are blocked by shipping containers, most life in most of the capital continues as usual.

The government's offer of talks followed a call from Khan on Sunday for his supporters not to pay taxes or utility bills. His appeal met with widespread ridicule since most Pakistanis who can get away without paying taxes and utility bills already do so - a major contributor to the country's economic woes.

Khan also warned that he may not be able to stop his supporters from marching on parliament and the fortified enclave where most foreign embassies are located.