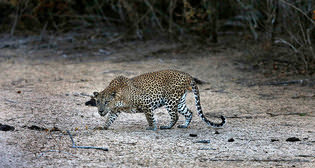 by Aug 27, 2014 12:00 am
A 56-year-old woman killed a leopard that attacked her by using a sickle and spade in a northern Indian village, officials said Tuesday.

Kamla NegI was recovering in hospital from multiple fractures and cuts in the hill state of Uttarakhand.

She was working at her farm Sunday when the cat pounced on her.

"Despite suffering deep cuts as the leopard bit her repeatedly, the woman valiantly fought it using farming tools," local official Dayal Singh Bhandari said by phone. "She managed to grievously injure the leopard resulting in its death."

Forest officials said Negi struggled with the leopard for 15 minutes before it retreated, only to attack her again.

"At the end of the encounter, villagers who gathered at the scene saw the leopard lying lifeless on the ground. It sustained fractures in three of its legs and a big blow to its jaw," forest officer Sohan Lal said.

Lal said the leopard's autopsy was being conducted to determine whether it died of the injuries inflicted by Negi or from cardiac arrest.

"But it is a fact that this brave woman single-handedly took on the ferocious cat, which died after the clash," he said.

The leopard population in Uttarakhand is growing, forest officials say, and conflicts with humans are becoming common.