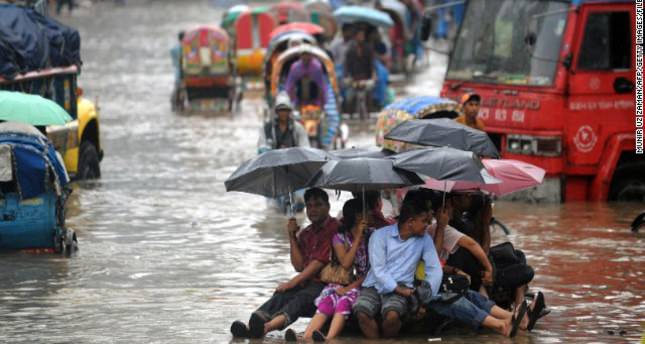 by AA Aug 28, 2014 12:00 am
Severe flooding in northern Bangladesh has paralyzed 12 districts, leaving hundreds of thousands of people stranded.

Monsoon floods that have hit the region for the past month have deteriorated over the past 10 days. The Water Development Board, which manages water resources, said the flooding is concentrated near the Teesta and Jamuna river basins, where the water level rose to 35 centimeters and 70 centimeters above the danger level.

At least 75,000 people have been directly affected in the town of Bogra alone and at least 50 educational institutions have been shut down due to the flood, according to Bogra's relief and rehabilitation officer, Mohammad Arifuzzaman.

According to Bangladeshi daily newspaper The Daily Star, an official from the Department of Disaster Management and Relief, Rafiqul Islam, said: "We have asked the local administration to determine the number of affected people and villages and send the information to us."

Flooding affects 20 percent of the country's territory every year. This increases to up to 68 percent during years of extremely severe flooding, according to the website of Department of Disaster Management and Relief.