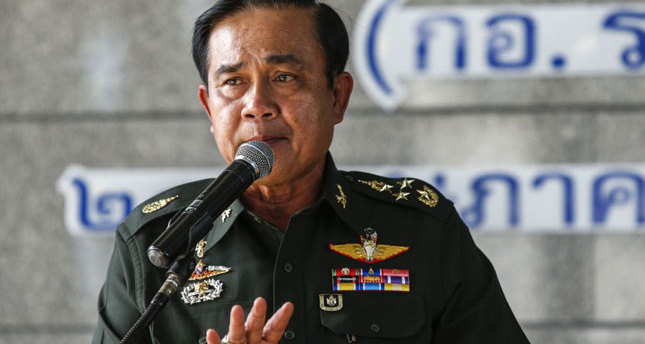 by AA Sep 02, 2014 12:00 am
Thailand's new prime minister, Commander in Chief of the Royal Thai Army Prayuth Chan-ocha has appointed a cabinet stacked with conservative technocrats and military officers seen as close to him. The prime minister, who was the general that staged the recent military coup, confirmed his will to maintain total control of the undergoing reform process before new elections are organized for late 2015. Of the 32 cabinet members who were appointed late Sunday, 11 are active military officers including two former army chiefs. The men in uniform control the key positions of ministries of defense, the interior, commerce, justice, foreign affairs, transport and education.

One of the two important cabinet positions to go to a civilian was the finance ministry, given to Sommai Pasi, a bureaucrat who was already part of a government appointed after the previous coup in 2006. Thailand has not seen such a concentration of power in the hands of the military since the authoritarian rule of Field Marshall Sarit Thanarat at the beginning of the 1960s. Local media greeted the announcement of the line-up with dismay. The Bangkok Post called the appointment of a military officer as foreign minister a "bad choice."

The foreign minister position was given to General Tanasak Patimapragorn, who is currently the supreme commander of the armed forces. After the military seized power on May 22 following a long political crisis, the U.S., EU and Australia froze some military cooperation programs. Among the non-military cabinet members, Pridiyathorn Devakula, a conservative former governor of the central bank, was appointed deputy prime minister overseeing economic affairs, and Narongchai Akrasanee, a former commerce minister, was named energy minister.

A junta-appointed national legislative assembly elected General Prayuth Chan-ocha as prime minister on Aug. 21. Besides his position as the government head, he is also the junta leader and army chief. Thailand's political crisis began in November when then Prime Minister Yingluck Shinawatra faced a wave of opposition protests after her government pushed through an amnesty that would have lifted the 2008 corruption conviction against her brother Thaksin, a divisive figure and ex-prime minister deposed in a 2006 coup.

Confronted by massive demonstrations, the government withdrew the bill, but the opposition alleged corruption by the government and Shinawatra family. Yingluck Shinawatra dissolved the parliament on Dec. 9 and called for elections to be held on Feb. 2, which were disrupted by the People's Democratic Reform Committee, who want an unelected "people's council" to run Thailand until the political system is reformed. She was then herself removed by the Constitutional Court on May 7 in relation to the transfer of a high-ranking civil servant in 2011. The May 22 coup removed the remaining ministers and dissolved the Senate, the only standing legislative assembly.
Last Update: Sep 02, 2014 10:05 am
RELATED TOPICS