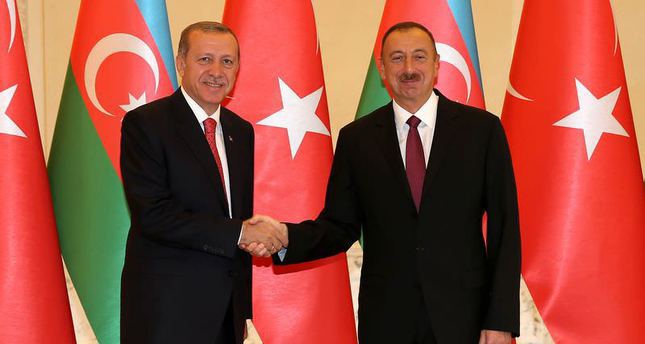 by AA Sep 03, 2014 12:00 am
The armed conflict between Armenia and Azerbaijan in the South Caucasus region of Nagorno-Karabakh will be resolved within the framework of international law, according to the President of Azerbaijan Ilham Aliyev. "The armed conflict over the occupation of Armenia is the utmost threat in the region," said Aliyev, at a joint press conference Wednesday held together with Turkish President Erdoğan, during the latter's two-day official visit to the country.

Nagorno-Karabakh is part of Azerbaijan but it has been under the control of Armenian soldiers since the end of the Nagorno-Karabakh War between 1988 and 1994. There are still ongoing military confrontations between ethnic Azeris and Armenians in the region.

"Armenia holds control of 20 percent of our land. About one million have been displaced as a result of this occupation," Aliyev said.

"The United Nations Security Council adopted four resolutions regarding the issue, but Armenia disregards them and does not withdraw its forces from Nagorno-Karabakh. This issue will be resolved within the framework of international laws."

Aliyev thanked Turkey for its ever-lasting support to Azerbaijan's long-simmering case and said, "Turkey's stand on this issue is very important for us."