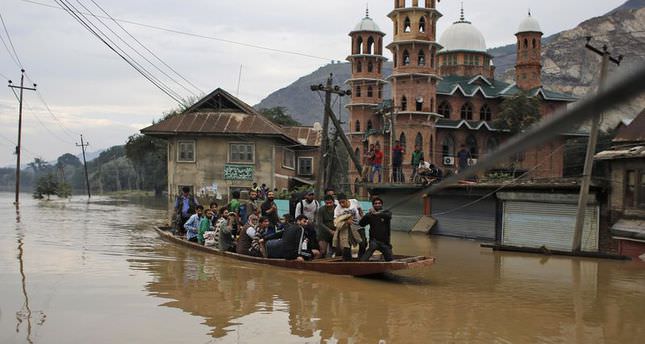 by Sep 09, 2014 12:00 am
The heaviest rains to fall on Kashmir in 50 years caught Indian and Pakistani authorities off guard, with criticism of their disaster preparedness growing on Tuesday as the number of dead hit 420 and thousands remained trapped on rooftops. On the Indian side of the heavily militarised de facto border that divides the Himalayan region, more than 2,000 villages and the city of Srinagar were submerged. "The damage is shocking, people have been stranded on rooftops of their homes for the last three days in some parts of Kashmir," a senior official of National Disaster Response Force said in New Delhi.

The official, who requested anonymity, said he would have deployed disaster response teams in Kashmir before the floods if his office had been given accurate weather predictions. "We were all caught off guard because there was not a single warning issued by the weather office. The flash floods took us by surprise," he said. India's metrological department forecast heavy rains in Kashmir last week, but the Central Water Commission, which issues flood advisories, has been criticised by Indian media for not warning the state. Some 22,000 people have been evacuated from their homes in India, where 217 have so far been reported dead.

Soldiers rescued families using boats and airlifting them from rooftops by helicopter after the river Jhelum breached embankments in Srinagar, but many more remained stranded. India has hundreds of thousands of soldiers stationed in Kashmir, manning the border and conducting counter-insurgency operations against separatist militants in a decades-old conflict that claimed thousands of lives at its peak but has cooled off in recent years. "Fortunately it is not raining in Kashmir today and we are now getting a chance to send our teams across the region to help tens of thousands of people who have been displaced," Indian defence ministry spokesman Sitanshu Kar said. In Pakistan, 203 people were reported killed by the flash floods in Kashmir and other northern areas of the country. Saeed Qureshi, an official at the State Disaster Management Authority (SDMA), said the volume of rainfall had rendered contingency plans useless. "Nobody can fight with nature," said Qureshi. "We had made a contingency plan, identifying vulnerable populations along the banks of rivers and torrents, but rains with unexpected density wreaked havoc on the hilly areas beyond our imaginations." Qureshi said so far 64 deaths had been reported, 29 of them from the Haveli district that straddles the Line of Control (LoC) separating disputed Kashmir between India and Pakistan. "The amount of rainfall in a day was a staggering 400 millimeters in Haveli which had no parallel in the past 50 years," he said, adding that his organization was badly in need of more resources.

The International Federation of Red Cross and Red Crescent Societies said this year's monsoon rains have killed more than 1,000 people in India alone. When flash floods two years ago in the Himalayan Indian state of Uttarakhand killed 5,000 people, including many Hindu pilgrims, disaster relief authorities were again criticized for their slow response.