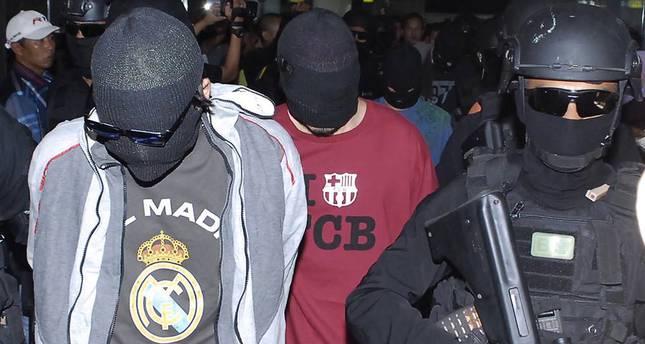 by Sep 14, 2014 12:00 am
Indonesia's anti-terrorism police have arrested four Turks suspected of being linked to the self-proclaimed Islamic State of Syria and Sham (ISIS) militant group, a spokesman said on Sunday.

The elite Detachment 88 police squad arrested the men, along with three Indonesians, after tailing their car on Saturday in central Sulawesi district of Poso, a known hotbed for militant activity, Boy Rafli Amar told AFP.

"They are Turkish," Amar said, confirming the arrest and adding that the men were being investigated for their connection to the militant group.
"We suspect they are linked and are investigating further," he said.

Indonesia is home to the world's biggest Muslim population of about 225 million and has long struggled with terrorism. But a successful clampdown in recent years has seen the end of major deadly attacks.

Ronny Sompie, another police spokesman said two of the Indonesians arrested Saturday had fetched the foreigners "believed to be from an international terror group" from Makassar airport in South Sulawesi.

"The four foreigners managed to flee to the mountains" before their capture, he said.