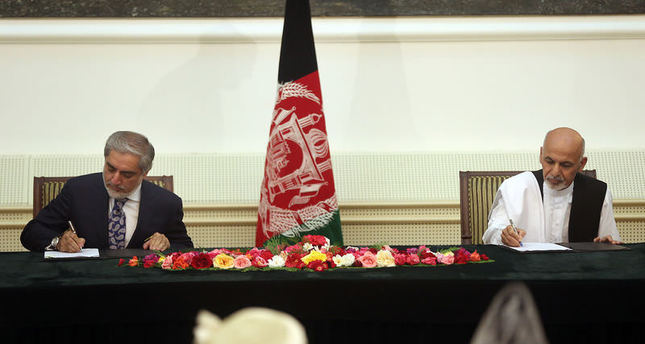 by Sep 21, 2014 12:00 am
Rival candidates in the bitterly disputed Afghan presidential election signed an agreement on a unity government on Sunday, potentially easing months of tension that destabilised Afghanistan after foreign troops withdrew.

Ashraf Ghani, a former finance minister was named president. The ceremony at the presidential palace, still occupied by outgoing leader Hamid Karzai, was broadcast live on television. Teams from the Ghani and Abdullah camps met late into Saturday night with U.N. representatives to try to finalise the powersharing deal before the release of the audit results. How much power the chief executive would wield was one of the main stumbling blocks.

A draft of the agreement seen by Reuters would give the chief executive the power to decide on a nearequal number of key government positions. It also calls for the unity government to call a loya jirga - a traditional Afghan council of elders - to help reform election laws and prevent future crises.
Karzai spokesman Aimal Faizi said Ghani is expected to be sworn in as president within a week. He said one of Ghani's first acts would be to sign a long-delayed bilateral security agreement with the United States to allow a small force of foreign troops to remain in Afghanistan after 2014.
The announcement followed a U.N.-monitored audit of all 8 million ballots cast in a June run-off vote that had been disputed by both major candidates - former World Bank official Ashraf Ghani and former foreign minister Abdullah Abdullah.

The election was showcased by Afghanistan's foreign backers as the first democratic transfer of power in Afghanistan's troubled history but the drawn-out dispute ruined hopes for a smooth transition from Karzai, who has ruled since soon after the Taliban were ousted in late 2001.
The uncertainty emboldened the Taliban-led insurgency to launch more attacks across Afghanistan, just as the newly trained Afghan security forces prepare to lead the fight against the militants on their own after foreign troops withdraw.

Preliminary figures released in July put Ghani ahead with 56 percent of the June 14 run-off vote, prompting street protests from supporters of Abdullah who alleged massive fraud and said he was the rightful winner.

The political crisis threatened to rekindle the ethnic tensions that plunged Afghanistan into civil war in the 1990s. Abdullah derives much of his support from the ethnic Tajik and Hazara communities, while Ghani is widely supported by the Pashtuns, Afghanistan's largest ethnic group.
The audit of the June 14 run-off was part of a deal brokered in July by U.S. Secretary of State John Kerry to try to avert a descent into violence.