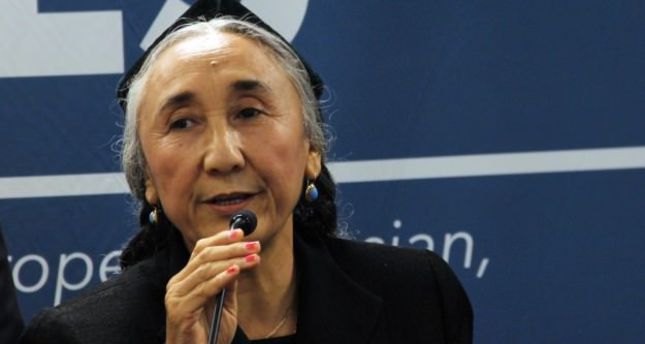 by AA Sep 28, 2014 12:00 am
The World Uighur Congress chairwoman Khadeer Rebiya called China's sentencing of an Uighur professor to life in prison last week "a declaration of war."

Ilham Tohti, 45, a prominent economics lecturer at a Beijing university, was arrested in January and accused of promoting the separation of Xinjiang -- China's Uighur populated province -- from the People's Republic.

Speaking to The Anadolu Agency in Washington on Friday, Rebiya said the Chinese court decision was "declaring a war against Uighurs" and showed the real face of the Chinese oppression.

"China sends the message both to Uighur and the world that you will be punished no matter how you go after your rights, whether you fight with weapons or you seek them in a peaceful way," Rebiya told the AA following an international conference on Uighur history, culture and society held at the George Washington University.

Rebiya said that the court sentenced Tothi to life in prison in order to silence the Uighur not to voice their legitimate rights.

"We told the world that China unjustly punishes us for we peacefully seek our rights, but the world did not believe in that. Now, the imprisonment of Tohti showed the world what we were really talking about," Rebiya said. "Now the world will believe in us."

The Uighurs are a Turkic-speaking Muslim minority who make up 60 percent of the population of the Xinjiang Autonomous Region. They have long protested against clampdowns on religious freedoms and the influx of ethnic Han migrants to the region.

Tohti was tried at the Xinjiang Uyghur Autonomous Region Urumqi Public Court last week. The trial was closed to the media and observers.

He rejected all accusations against him but the Chinese court confiscated all his properties and sentenced him to life in prison.

The World Uighur Congress is the self-proclaimed government in exile.