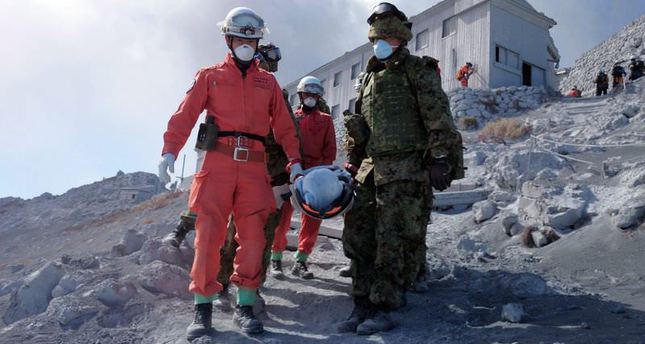 by Oct 01, 2014 12:00 am
The death toll from Japan's volcanic eruption rose to 48 on Wednesday, the worst in 88 years, after more victims were discovered on the ash-covered summit.

Military searchers resumed a recovery operation with helicopters early on Wednesday a day after officials called off rescue efforts because of poisonous gas and fears of another blast.

The eruption of 3,067-metre (10,062-foot) Mount Ontake, 200 km (125 miles) west of Tokyo, blanketed the peak with a deadly rain of ash and stone as it was crowded with climbers and hikers enjoying the autumn colours.

Police raised the death toll to 48.

That exceeds the 43 people killed in a 1991 eruption in southwest Japan and becomes the deadliest volcano since a 1926 eruption on the northern island of Hokkaido, which killed 144 people, according to government data.

Japan is one of the world's most seismically active countries. There had been no fatalities since the 1991 eruption of Mount Unzen, which caused a pyroclastic flow of superheated current of gas and rock.

Mount Ontake, Japan's second-highest active volcano, had a minor eruption seven years ago. Its last major eruption, the first on record, was in 1979.