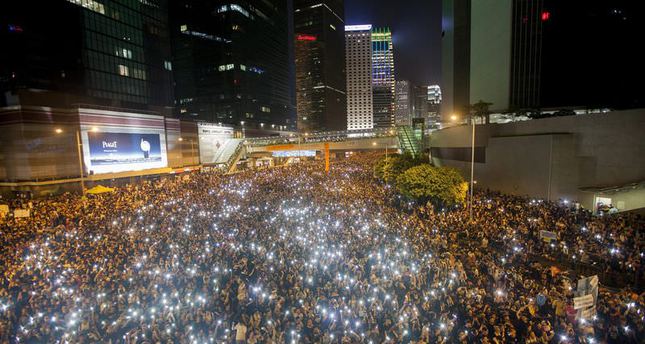 by AA Oct 01, 2014 12:00 am
Pro-democracy protesters continued their five-day-old occupation of major thoroughfares in several districts Wednesday amid increased uncertainty about how the biggest challenge to China's rule over the former British colony would end.

Beijing is marking the anniversary of the 1949 founding of the People's Republic of China today, a public holiday, and, once the date passes, some fear authorities will again deploy force to try to break up the demonstrations.

"The government doesn't want to mar the national day holiday, so things have been calm these last few days," Raphael Wong, the vice-chairman of the pro-democracy League of Social Democrats, told the Anadolu Agency. "But after today, we are worried that the police will come again."

Protesters are calling on China's central government to cease what it sees as interference in Hong Kong politics, demanding that they allow the territory to choose its own leader.

In August, Chinese leaders ruled that while Hong Kongers could choose their next chief executive in elections set for 2017, they could only elect someone from candidates vetoed by Beijing.

In an early evening warning Wednesday, protesters warned that they would occupy government buildings on Thursday if present Chief Executive Leung Chun-ying - who they see as a stooge of Beijing - doesn't resign.

From 6.00 p.m. local time Sunday (1.00 p.m. Turkish local time) until early Monday, police fired tear gas 87 times at nine locations to disperse protesters. Widespread condemnation of that escalation in force saw the government withdraw its riot police. There has been no clashes since and the protests have continued peacefully.

The movement has since been dubbed the "umbrella revolution," because protesters have en-masse used umbrellas to defend themselves against pepper spray.

The number of protesters, in the tens of thousands at the main site, has been swelling in the evening and falling off in the morning as those who stayed all night go home. Organizers said earlier 50,000 had attended on Saturday.

Some observers worry that if the protests persist and the Hong Kong police again fail to disperse the demonstrators, the Chinese military, known as the People's Liberation Army, could be ordered to intervene. That scenario revives memories of the killing of student protesters in Tiananmen Square, in the heart of Beijing, in June 1989. The 1989 movement, initiated by students to push for a democratic China, ended when the military shot dead hundreds, perhaps more than 1,000.

Overnight, protesters endured heavy rain that lasted for about an hour. Many quickly utilized the umbrellas previously used to ward off the pepper spray, along with raincoats that volunteers handed out. Others took shelter under bridges and overpasses.

One father brought his eight-year-old daughter to the main protest area, outside Admiralty MTR station. "We need very little freedom but they [Beijing] will not even give us that," the 32-year-old who works in logistics told the AA as he and his child sat quietly on camping mattresses. He added that he felt proud and happy that such a large number had come to protest.

The protesters are fighting for democracy after China said Hong Kong would elect its leader in 2017 only after a Beijing-controlled body had screened the candidates. They say such an election method would be a sham, and have threatened to occupy government buildings.

The British prime minister, David Cameron, told Sky News Tuesday that he was deeply concerned about the clashes between riot police and the pro-democracy protesters.

"When we reached the agreement with China there were details of that agreement about the importance of giving the Hong Kong people a democratic future within this two systems approach that we were setting out with the Chinese," he said. "So, of course, I am deeply concerned about what is happening and I hope this issue can be resolved."

Hong Kong - an international financial center - was a British colony from 1842 to 1997.

"We are resolutely opposed to any foreign country using any method to interfere in China's internal affairs," she added.

Thursday is also a public holiday in the territory and the number of protesters could increase tonight.