US calls for Hong Kong restraint, China says not to meddle 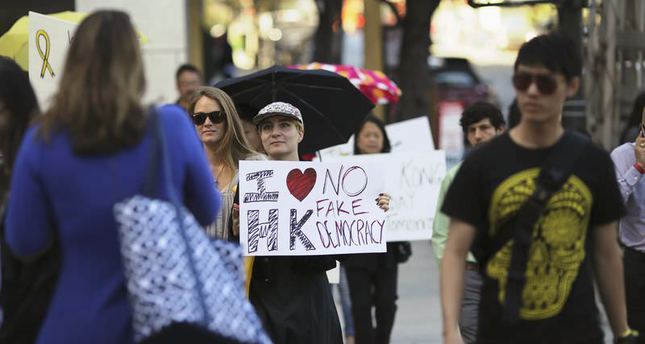 by Oct 02, 2014 12:00 am
Chinese Foreign Minister Wang Yi responded on Wednesday to comments by the United States and others on pro-democracy protests of the huge crowds of Hong Kongers, saying foreign countries should not interfere with China's domestic affairs.

Wang, the most senior Chinese official to speak publicly about the protests, said Beijing had "very formally and clearly stated its position: Hong Kong affairs are China's internal affairs. All countries should respect China's sovereignty."

He was speaking at the U.S. State Department before talks with Secretary of State John Kerry, who repeated U.S. calls for Chinese authorities to show restraint toward the mass protests challenging the communist government.

Wang said no country, including the United States, would tolerate "illegal acts that violate public order." He added: "We believe that the Hong Kong special administrative region's government has the capability to properly handle the current situation in accordance with the law."

He met at the White House later with President Barack Obama, who told him the United States was closely watching the Hong Kong protests and urged a peaceful solution to the issue. Obama also affirmed he would be traveling to China later this year.

Riot police in Hong Kong used tear gas, pepper spray and baton charges last weekend to try to quell unrest, but streets in the Asian financial hub were calm early on Thursday while police largely kept their distance from tens of thousands of mostly young people who have continued protests for nearly a week.

Kerry said: "We have high hopes that Hong Kong authorities will exercise restraint and respect protesters' right to express their views."

The protesters are demanding full democracy and have called on Chief Executive Leung Chun-ying to step down from the top office of the former British colony that reverted to Chinese rule in 1997. On Aug. 31, Beijing decreed that it would vet candidates wishing to run for Hong Kong's leadership in 2017. Protesters are demanding that Beijing refrain from vetting candidates.

On Tuesday, U.S. officials said the legitimacy of Hong Kong's chief executive would be enhanced if Hong Kong residents had a genuine choice of candidates.

Kerry did not explicitly make that point on Wednesday in his public remarks, but said: "We believe an open society with the highest possible degree of autonomy, governed by the rule of law, is essential for Hong Kong's stability and prosperity."

Asked why Kerry did not repeat that language, his spokeswoman Jen Psaki said it remained the U.S. position and that the secretary of state had focused his remarks on China's role.

Wang met earlier with Defense Secretary Chuck Hagel. The State Department said he and Kerry would continue their talks later at a second, previously unscheduled meeting.

More than a dozen protesters gathered under overcast skies outside the Chinese Embassy in Washington in support of Hong Kong's democracy movement.

Grace Ho, an attorney from Hong Kong, was in a taxi when she heard about the protest and decided to attend. "I believe in a post-democracy movement," Ho said. "I believe in one person, one vote. I am proud that China has done so well. But it means nothing without democracy."

In Toronto, more than 600 people held a rally in support of demonstrators in Hong Kong, chanting: "One country, two systems. Hong Kong autonomy."

The Washington talks with Wang were arranged to prepare for Obama's visit to China in November for an Asia-Pacific summit but were overshadowed by the Hong Kong events.

Other issues affecting the two major powers were also on the agenda in the talks between Wang and Kerry, as Obama presses his "pivot" to refocus U.S. attention increasingly on Asia.

The United States has been carefully calibrating its response to the demonstrations, voicing support for non-violent protests while signaling it has little interest in seeing them escalate and risk a harsher crackdown by Chinese authorities.

Any U.S. response to the Hong Kong protests is a tricky balancing act, given Beijing's transformation into a global economic powerhouse and how interdependent the U.S. and Chinese economies have become since the Tiananmen crackdown in 1989.

He referred to Chinese efforts to help tackle the spread of Ebola in West Africa. "We are appreciative for China's willingness to put both equipment and personnel on the line in order to help deal with this," Kerry said. "We view that in very positive terms with respect to China's important role in global leadership."