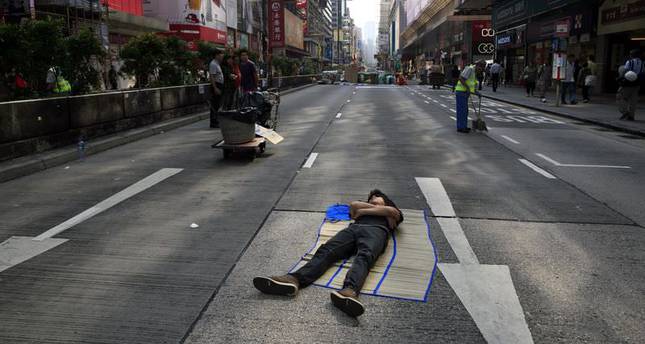 by AA Oct 09, 2014 12:00 am
The Hong Kong government has cancelled a meeting with student leaders scheduled to take place Friday, following threats from lawmakers to escalate protests if demands were not met.

Hong Kong's Chief Secretary Carrie Lam said in a press conference late Thursday that the "constructive basis for dialogue had been undermined" over the last few days.

The announcement came hours after lawmakers in support of protests that have paralyzed major Hong Kong intersections said two sub-committees they chair will block the passage of bills if the government does not yield in the talks.

The action was the first to take a complaint of China meddling in local politics away from the street, extending the protests to the legislature.

Civic Party leader Alan Leong - standing beside student leaders Joshua Wong and Alex Chow and other lawmakers - had told a press conference earlier Thursday that "the non-cooperation will be clearly felt if there is not a positive response from the government."

He added that the group were making the announcement together to illustrate how serious they are about the talks with the Chinese territory's government on a solution to the crisis that at one point saw tens of thousands block major roads.

Around 300 protesters remain on the streets, but as of 20.00 local time there had been no response from protest leaders.