Turkey to mediate between Afghanistan and Pakistan: President Erdoğan 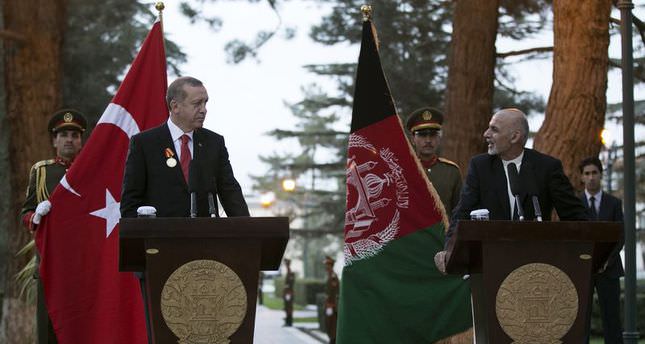 by AA Oct 18, 2014 12:00 am
Turkey will continue to mediate between Afghanistan and Pakistan on terrorism-related issues, President Recep Tayyip Erdogan said Saturday.

He added the measures contributed greatly towards ensuring a stable and peaceful election environment in Afghanistan.

"There are three Muslim countries in question here. We expect to take decisive steps during the negotiations," Erdogan said.

It aims to resolve problems arising from Afghan government allegations that the Afghan Taliban find sanctuaries inside Pakistan and build mutual trust between the two neighboring countries.

"Extremism is not just the problem of only one country, but it is an international problem," Ghani said.

He said there could be success in finding a solution if the terrorism threat was dealt from a 'common perspective.'

"Turkey plays a vital role in that question" in Afghanistan-Pakistan relations, he said, "so we look forward to Erdogan's efforts in this regard."

This is the Turkish president's first visit to Afghanistan since Ghani became the president. He arrived in the country early Saturday morning.

Erdogan also said Turkey along with the U.S., Germany and Italy would be one of the four NATO countries that would continue to support the development of the Afghan National Security Forces.

Turkey would also contribute to the security and operations of the Kabul airport, he said.