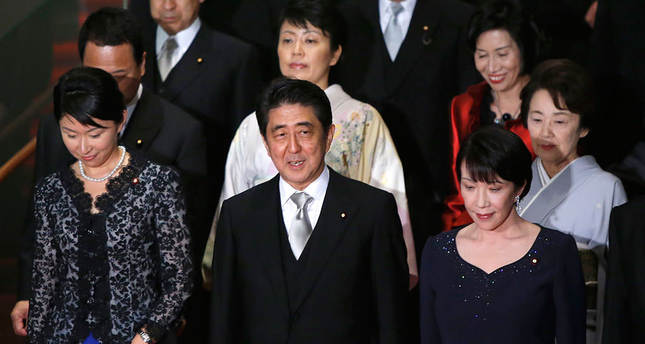 The September 7 reshuffle set a record number for female cabinet members and was seen as a positive example of Abe's policy of empowering women - sometimes known as "womenomics."

The most prominent was Obuchi who, at 40, was one of the youngest and most promising figures in Abe's cabinet. The daughter of former Prime Minister Keizo Obuchi, she was seen as having the potential to become Japan's first female premier.

Before her appointment last month commentators speculated she might be appointed secretary-general, the second highest rank in the ruling Liberal Democratic Party. Instead, she was given the high-profile trade and industry portfolio.

Matsushima quit over distributing paper fans with her name on them to voters in Tokyo, which fell foul of Japan's tough complex electoral laws.

The resignations will damage Abi's government, which has promoted elevating women in society as a key policy, the Japan Times reported.

Obuchi - who inherited her seat in the Japanese parliament, or Diet, from her father and has won five elections-resigned over alleged misuse of political funds by support groups in her home district in Gunma prefecture.

A mother of two sons, Obuchi was in charge of Japan's nuclear power policy following the 2011 Fukushima meltdown and was to be the "soft face" of nuclear restarts. Polls show that women with children are more strongly opposed to nuclear power than any other segment of Japan's population.

Matsushima's alleged breach is considered a serious scandal because she oversaw Japan's prosecutors and on Friday, the Democratic Party of Japan filed a criminal accusation, urging prosecutors to open a legal investigation against her, the Times said.
She claimed Monday that she broke no law but was stepping down because she didn't "want to delay Diet deliberations."

Abe has yet to choose replacements for either portfolio and it will be difficult to replace them with other women and maintain the cabinet's gender balance due to the low representation of women in the Diet.

Abe's approval ratings, which stood at around 60 percent two months ago have fallen by nearly 20 percent. At the weekend his plans to stage a summit with Chinese President Xi Jinping next month were undercut by the visit of three cabinet ministers to the controversial Yasukuni shrine to Japan's war dead, many regarded as war criminals in countries occupied by Japan during World War II.