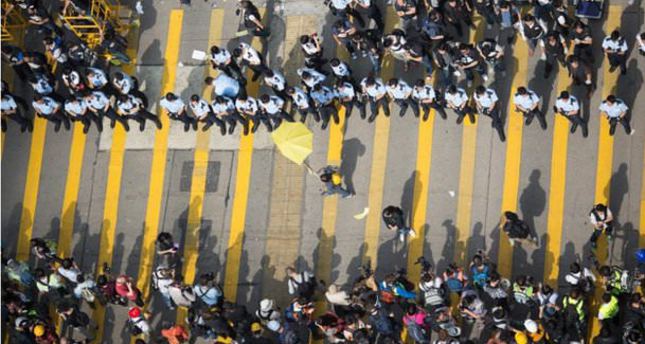 by Abdulkadir Alkan Dec 01, 2014 12:00 am
Over the last two nights, protesters and police officers in Mong Kok played cat and mouse for a couple of hours as usual. The situation was getting quite tense as the police used baton charges against demonstrators. According to RTHK, 28 protesters were arrested, and 10 other people were injured. Afterwards, the police asked protesters to move to Tsim Sha Tsui to clear the area. Thousands of demonstrators resisted at first. Then surprisingly, the crowds agreed and started to march towards Tsim Sha Tsui. This was a brilliant tactic, as later the police lost control of the direction of the crowds. The protesters were chanting "gou wu" (shopping) in a sarcastic way, as police officers attempted to clear the area. That was because last week C. Y. Leung, the chief executive of Hong Kong, called on people to return to Mong Kok to shop, as he argued that businesses in the area had suffered much lately. It seems the protesters decided to mock the administration by taking the advice of Leung.

Protesters quickly learned a new way to deal with cops, which was to move like water across streets. Quoting Bruce Lee, "Be like water," the crowds started to flow down to the harbor. There was nothing much the police could do to control the crowds because they were trained to confront protesting groups face-to-face. Every time police officers tried to get ahead of the crowds, the protesters took sudden spontaneous turns at junctions. The protesters were able to fake out the police five times with these quick shifts.

It was already 5:00 a.m. when the crowds reached the harbor. Then, they all started to chant "Moses" at the sea. They were referring to the biblical tale of Moses parting the Red Sea. The meanings behind the symbols and slogans in the Umbrella Movement are full of sarcasm and humor.

The protesters have now learned a new strategy to cope with the police. They moved like fluid last night. The police couldn't come up with a way to surround the crowds. The police clearly lack the numbers to deal with thousands of protesters.