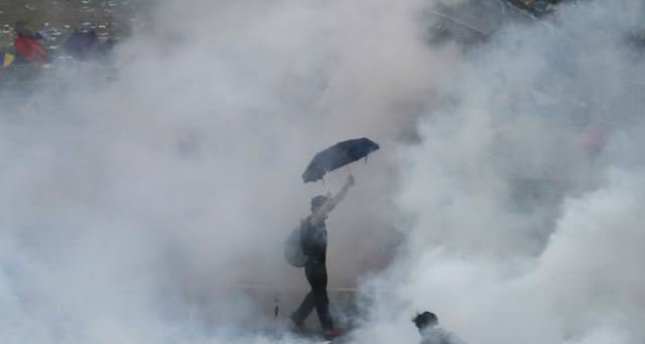 by Abdulkadir Alkan Dec 02, 2014 12:00 am
It is quite interesting that protesters in Hong Kong are inspired by the biblical tale of Moses and Pharaoh. It is hard to say if they found their Moses, yet they regard Victoria Harbour as the Nile and the Chinese Communist Party is Pharaoh in their eyes for sure. The way the protesters move across the streets puts police officers in a difficult position as the new tactic of flowing like water separates the manpower of the police.

Isaac, 33, Angel, 23, and Laury, 33, all Protestants, are three laymen who keep regularly reading Bible verses to police officers. Isaac has studied religious studies at university and he goes every day to the Mong Kok area to read the Bible to police officers. He and his friends had earlier set up a small chapel in the middle of the road, but police officers have demolished their chapel two times already. He read 2 Maccabees – about the Hebrews in the Egyptian Empire under Pharaoh where they were forced to abandon their old ways of living and worship Egyptian gods. That chapter tells of how the locals of Judea follow their own beliefs. One police officer asked those reading the Bible not to lift the cross so high. But they did not obey as they said it should be put high when they read the Bible. They say they will keep reading the Bible to police officers and have prayer gatherings in the future. Isaac said that there are some Christian police officers who they confront sometimes. He believes that their spirits are endangered and that is why they feel they need to pray for those officers too. Isaac also pointed out that in the past, during the colonial period people did not care about politics much as, according to him, they believed it was idiotic. Nonetheless, nowadays the situation is very different and people have realized that they have to deal with politics.

Students from the University of Hong Kong, Hong Kong Baptist University and City University of Hong Kong told me that they came to the area to have dinner. Once they went out of the restaurant on their way to take a minibus home, the police charged them. Johnny, 21, said he was "freaking scared." Sunny, 26, and Ryan, 24, said the police hit them with their shields. They went to play football and as soon as they were done with dinner, the incident happened. They said they were pedestrians passing and were not interested in joining the demonstrations, but were subjected to the police charge.