Half a million evacuates as typhoon nears Philippines 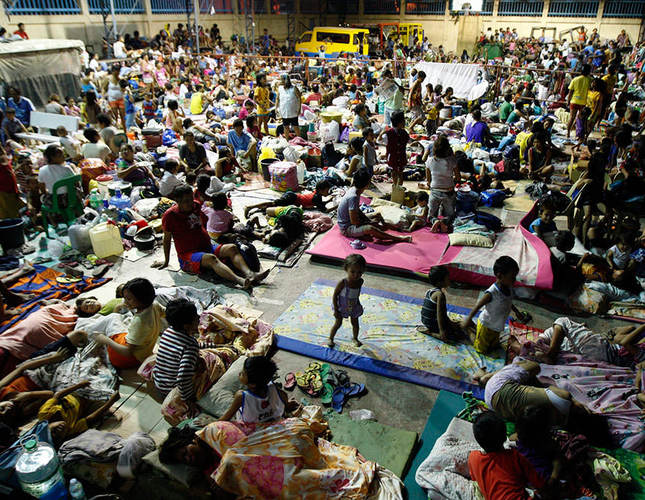 by Dec 05, 2014 12:00 am
Around half a million people fled coastal villages and landslide-prone areas in the central Philippines on Friday, a day before a powerful typhoon was expected to hit the island nation where thousands died in a storm 13 months ago.

Typhoon Hagupit weakened slightly as it churned slowly across the Pacific, dipping below the category 5 "super typhoon" level, the Philippine weather bureau PAGASA said, but likely to remain destructive when it hits land on Saturday.

Philippine Airlines and Cebu Pacific cancelled more than 150 flights to central and southern Philippines on Friday and Saturday. Ports shut across the archipelago after the coastguard suspended sea travel.

"Over 100,000 families are already in evacuation centers," said Corazon Soliman, Social Welfare secretary. "Multiply it by five (persons per family), that's 500,000" she said, adding that most of the residents had volunteered to leave.

The eastern islands of Samar and Leyte, which are still recovering from last year's super typhoon Haiyan, could be in the firing line again.

"I am afraid and scared," said Teresita Aban, a 58-year-old housewife from Santa Rita in Samar province, wiping away tears and trembling. "We're prepared but still fearful. We haven't finished repairing our house. It still has tarpaulin patches -- and here comes another storm."

The United Nations Office for Disaster Risk Management said in Geneva that 200,000 people had been evacuated from the central island province of Cebu alone.

"Typhoon Hagupit is triggering one of the largest evacuations we have ever seen in peacetime," said spokesman Dennis McLean.

The eye of the storm hovered 305 km (190 miles) east of Borongan, in Eastern Samar, on Friday afternoon, PAGASA said. Cold, dry Siberian winds blowing from the north had sapped some of its strength, but it was still packing winds of up to 195 kph near the center, with gusts of up to 230 kph.

"Although we said it has weakened, 195 kph is still very strong ... We should not be complacent," said Landrico Dalida, Jr. acting deputy administrator for operations at PAGASA.

The agency added that the radius of the storm had narrowed slightly to 600 km from 700 km, but said it would still bring torrential rain and 3- to 4-metre storm surges when it slams into Eastern or Northern Samar provinces on Saturday evening.

The weather bureau also said the typhoon had veered slightly north and was moving west-northwest towards eastern coasts at around 13 kph.

More than 7,000 people died or went missing when typhoon Haiyan, known locally as Yolanda, tore through the central Philippines in November 2013. The storm, one of the strongest typhoons ever to make landfall in the world, left more than 4 million people homeless or with damaged houses.

"It's better to evacuate early ... We don't want to experience what we went through during Yolanda," said Gigi Calne, a housewife seeking shelter with about 3,000 others at a school in Basey, in Samar province, in central Philippines.

About 10 million residents of the Bicol and Eastern Visayas regions of the central Philippines are at risk of flooding, storm surges and strong winds as Hagupit hits land. AccuWeather Global Weather Center said more than 30 million people would feel the impact of the typhoon across the Philippines.

The weather bureau said 47 provinces in the central Philippines were at risk of strong wind and rains, including Eastern Samar and Leyte, worst-hit by the 250 kph winds and storm surges brought by Haiyan. About 25,000 people still live in tents, shelters and bunkhouses more than a year later.

In Tacloban City, Leyte, which accounted for about half of the death toll from Haiyan, about 19,000 people from coastal villages crowded into 26 evacuation centers, said Ildebrando Bernadas of the city's disaster office.

"We are expecting to double that once we implement forced evacuations," Bernadas said.