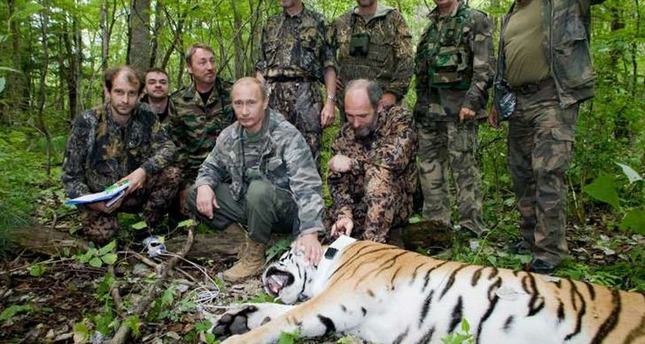 by AA Dec 10, 2014 12:00 am
One of three Siberian tigers released into the wild by Russia's president has returned to the country after spending the last two months in China.

Xinhua quoted Zhang Minghai, vice director of the State Forestry Administration's feline center, as saying, "Kuzya is very likely to venture into China again as it marked the areas he visited with his urine, designating his 'territory'."

Zhang added, "China has a sound forest ecosystem and plenty of food."

He said that while Kuzya had not avoided roads or villages in the region, there had not been any reports of the tiger devouring any domestic animals.

Zhu Shibing, a wildlife protection expert from the Northeast Forestry University, told Xinhua the goats' skulls had been crunched, illustrating the power of the tiger's jaws.

Putin released the cubs into the wild in early summer 2014. Thanks to their tracking devices, Kuzya and Ustin were tracked into China.

Jiang Guangshu, executive deputy chief of field research at China's forestry administration, has said that they regularly receive updated findings from Russia on the tigers.

Siberians -- one of the world's rarest animal species -- predominantly exist in eastern Russia, northern Korea and northeast China. Fewer than 500 of them are believed to live in the wild.