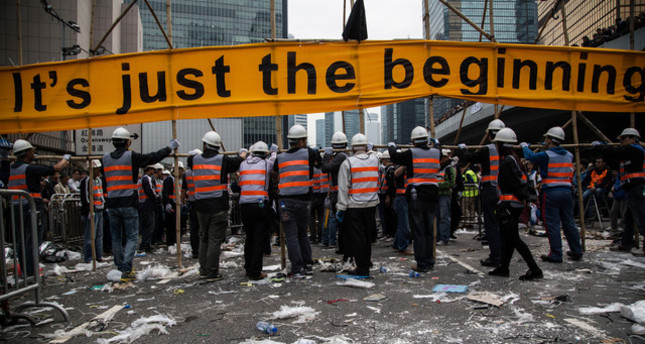 Seventy-five days after the Occupy Hong Kong movement started, the streets surrounding the Legislative Council of Hong Kong were cleared of protesters, tents and barricades on Thursday

Police made a statement on Wednesday to set a date for the clearance of Admiralty due to a previous decision given by the high court on Dec. 9. The decision called for the clearing of three main protest sites in Admiralty. Previously, on Wednesday, Dec. 3, the founders and leaders of the Occupy Central movement, Professor Benny Tai, Professor Chan Kin-man and Reverend Chu Yiu-ming decided to turn themselves in to police, and called on students to retreat and cease their demonstrations.

Wednesday night, student leaders, Alex Chow, Joshua Wong and Lester Shum made statements that they would not resist the police, but that citizens will make their own decisions whether or not to stay in the area. More than 10,000 people gathered the night before the police began to clear the area. Some people lined up to have a memorial photo taken as a souvenir, while others painted pictures of historical protest sites such as the Lennon Wall. On this night, student leaders expressed their gratitude for the support of the protesters. Protesters chanted slogans: "I want genuine elections," and sang songs and danced until early morning.

At 9:00 a.m. on Dec. 11, police officers, bailiffs and workers arrived in the area. They warned that if people did not leave the streets, they would be arrested, and many protesters left the area. Nonetheless, some veteran pro-democracy protestors such as Martin Lee, a long-time activist and former chairman of the Democratic Party, and Albert Ho, also a former chairman of the Democratic Party, arrived in the area and sat on the street waiting to be arrested by police. There was no violent resistance by demonstrators, although some protesters remained at the center of the Admiralty protest site despite warnings of arrest by the police. However, the resistance was passive, and the people remaining waited to be arrested peacefully. Jo, an American professor from the City University of Hong Kong, was present at the area wearing his gown. He said he came to the area in order to make the process of clearance less violent with his academic identity.

Later, 209 people were arrested throughout the day, including four pro-democracy activists who were arrested in their homes. This occurred as the police were trying to stop leaders from going to protest sites to attract more protesters.

On Thursday, traffic started to flow on Harcourt Road, the main artery connection between Admiralty and Central. The clearing of the protest sites has finished, yet the messages, "We'll be back," written in chalk by protesters are still visible.

It is hard to say whether the police clearance of the protest sites in Admiralty was the end of a beginning or the beginning of an end. Protesters are well aware of the fact that they cannot fight Beijing, a strong authoritarian force, yet they are trying to take a stand against the Chinese Communist Party for the sake of future generations. It is impressive enough that protesters surrounded the Legislative Council of Hong Kong by sleeping in tents despite cold winds at night.

The protests have left a significant impact on the residents of Hong Kong. Even though they have retreated, the protesters demonstrated that they are strong enough to occupy Central for 75 days.