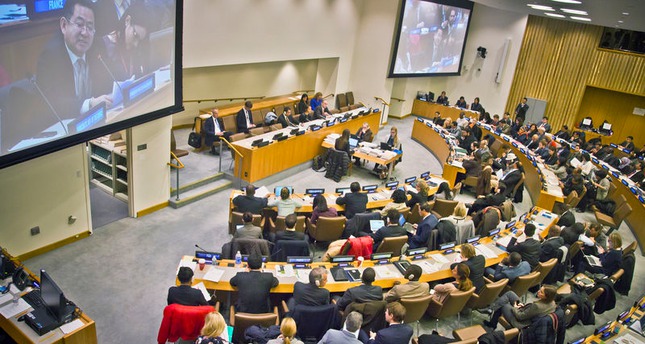 by Dec 18, 2014 12:00 am
Member countries of the United Nations on Thursday urged the Security Council to consider referring North Korea to the International Criminal Court (ICC) for crimes against humanity as alleged in a U.N. inquiry report released earlier this year.

There were 116 votes in favor of the resolution, with 20 against and 53 abstentions. The resolution, which was drafted by the European Union and Japan, was approved last month by the 193-member assembly's Third Committee, which deals with human rights.

The resolution linked the alleged abuses to policies of North Korea's leadership and urged the Security Council to consider sanctions against those responsible.

The vote increases political pressure on North Korea, but it is largely symbolic and non-binding.

"My delegation totally rejects the resolution," North Korea's U.N. Ambassador Ja Song Nam told the assembly. "It is a product of a political plot and confrontation."

He added that Pyongyang was ready for "dialogue and cooperation in the field of human rights," but rejected the use of the issue as an instrument for regime change.

It is unlikely to lead to action in the International Criminal Court at The Hague, which looks at serious abuses like genocide and other crimes against humanity, because China would likely use its veto power to block it.

China is North Korea's principal ally and protector on the 15-nation U.N. Security Council and has Russia's support, diplomats say.

General Assembly resolutions condemning human rights abuses in Iran, North Korea, Myanmar and Syria have become an annual occurrence, but this was the first time a North Korea resolution included a recommendation for an ICC referral.

The North Korea resolution pointed the finger squarely at Pyongyang's top leadership by acknowledging the commission's finding that there were "reasonable grounds to believe that crimes against humanity have been committed ... pursuant to policies established at the highest level of the State for decades."

Western Security Council members plan to move quickly to formally put North Korea on the council's agenda. They expect to discuss the U.N. inquiry report on Monday despite objections from China, which says the council is not the proper forum for discussions on human rights.