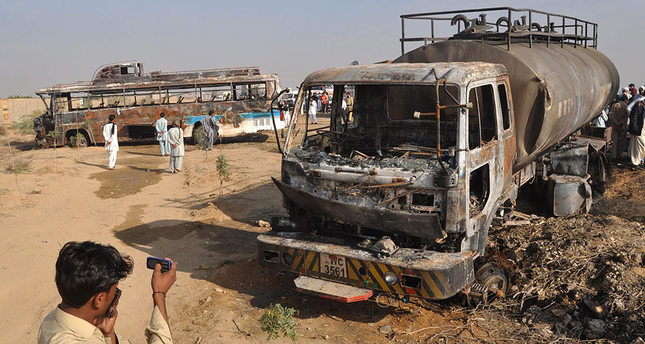 by Anadolu Agency Jan 11, 2015 12:00 am
At least 59 people were killed in a head-on collision between an oil tanker and a passenger bus near Pakistan's southern port city of Karachi early Sunday morning, officials said.

The bus caught fire immediately after being hit head-on by the tanker loaded with oil, eyewitnesses and police said. The accident occurred some 60 kilometers from Karachi, the country's commercial capital.

10 others were injured in the accident.

"The clash was severe and only a few could survive," the Information Minister of Pakistan's Sindh province, Sharjeel Memon, told reporters.

The victims included 17 people from a same family, the minister said.

"All the bodies have been shifted to the hospital, where their heirs are trying to identify them, as many of them have been completely charred," Memon said.

The cause of the accident is being ascertained, he added.