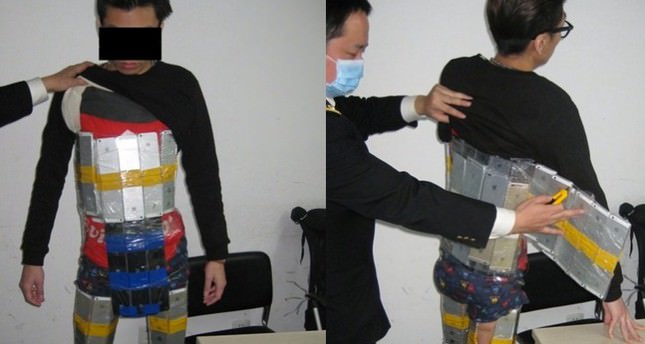 by Jan 13, 2015 12:00 am
A man nabbed for attempting to smuggle 94 smartphones into China by strapping them to his body was mocked by amused netizens Tuesday after pictures of his "iPhone armour" went viral.

Online images of the man show him covered in dozens of handsets, held together under his outer clothes with clingfilm and masking tape, with commentators comparing him to comic superhero Iron Man.

He was held in the southern city of Shenzhen as he tried to enter from neighbouring Hong Kong with his hidden cargo, the People's Daily said Monday.

The former British colony is controlled by Beijing but maintains separate trade rules from the mainland under the "One country, two systems" principle.

"When the person passed through the metal detector gate, it made a loud and clear alarm," the report said.

Despite being made in China, iPhones are relatively expensive in the country, with many users having to sign up to long-term contracts with mobile companies, and there is a thriving trade in informal imports from Hong Kong.

"I just keep thinking this guy is trying to imitate Iron Man," one commented on Tuesday.