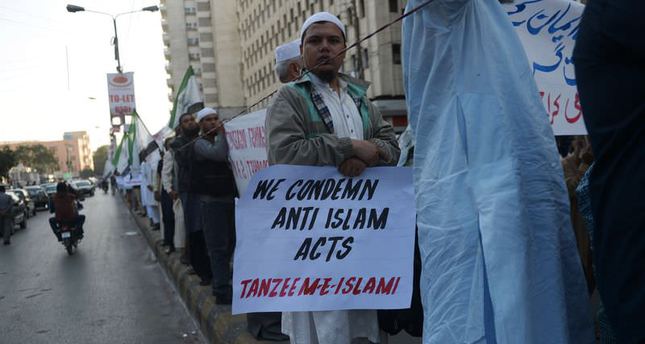 At least three people were injured, including an AFP photographer who was shot in the back on Friday in clashes between anti-Charlie Hebdo protesters and police outside the French consulate in Karachi in Pakistan, officials said.

The protest by the student wing of the Jamaat-e-Islami religious party was one of several staged across Pakistan after Friday prayers against the depiction of the Prophet Mohammed by the French satirical magazine. The rallies came a day after Prime Minister Nawaz Sharif led parliament in condemning the cartoons in Charlie Hebdo.

The French magazine is well-known for its satirical attacks on political and religious leaders. Its satirical depictions were heavily criticized after depicting the Prophet Muhammed, which is strictly prohibited in Islam.

Protesters chanted slogans against the satirical weekly and burnt the French flag. "May our lives be sacrificed for Muhammad," protesters chanted, while marching through the mosque compound following Friday prayers.

Protesters also carried flags of the Palestinian group Hamas and chanted slogans against the Palestinian Authority President Mahmoud Abbas, who took part in an "anti-terrorism" rally in Paris on Sunday following a deadly attack on the magazine's headquarters.