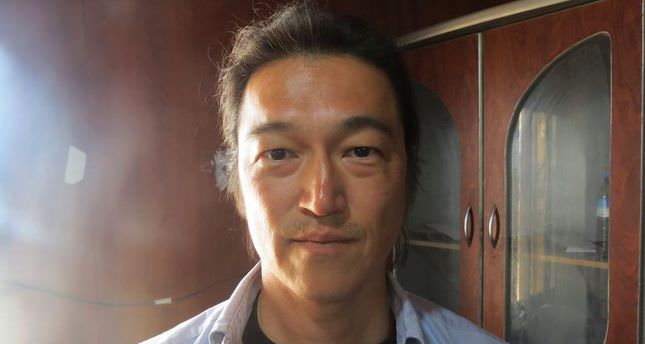 by Feb 03, 2015 12:00 am
A poignant tweet by murdered journalist Kenji Goto on the virtue of being calm was spreading rapidly on social media Tuesday, days after he was apparently beheaded by the self-proclaimed Islamic State of Iraq and al-Sham (ISIS).

"Close your eyes and remain patient. It's over once you get angry or yell. It is almost like praying. Hating is not the role of humans; judgement is God's domain," Goto's four-year-old tweet read.

"It was my Arab brothers who taught me this," he tweeted in Japanese on September 7, 2010.

By Tuesday morning the message had been retweeted more than 25,000 times in Japanese, with English versions also widely circulated.

Goto's brutal execution by militants from the ISIS movement has provoked an outpouring of emotion in Japan, a country that previously considered itself far-removed from the violence that afflicts western nations facing off against militants.

In a statement on Sunday, his mother cautioned against this emotion becoming destructive.

"I believe this sorrow must not create a chain of hatred," said Junko Ishido.

Goto's killing was announced in a video posted late Saturday by ISIS militants and came a week after his friend and fellow captive Haruna Yukawa was beheaded.

The 47-year-old freelance journalist, who established his own video production company in 1996, had supplied documentaries on the Middle East and other regions to Japanese television networks.

Much of his work had focused on the plight of children in war zones.

The hostage drama erupted after Prime Minister Shinzo Abe pledged $200 million in aid for refugees fleeing ISIS-controlled areas in Syria and Iraq during a tour of the Middle East last month.

Militants initially demanded the same sum in exchange for Goto and Yukawa, whom it had been holding for months, equating Abe's pledge to setting Japan against the IS.

Japan's top government spokesman Yoshihide Suga said Monday Tokyo had had "no intention at all" of paying the ransom.

During the fraught period between the emergence of the first video and Goto's murder, the Japanese government had refused to make explicit its position on payment of a ransom.

It was unclear how serious ISIS was about negotiating.

After beheading Yukawa, the group switched its demand to the release of a failed female suicide bomber, Sajida al-Rishawi, sitting on Jordan's death row, in exchange for Goto.