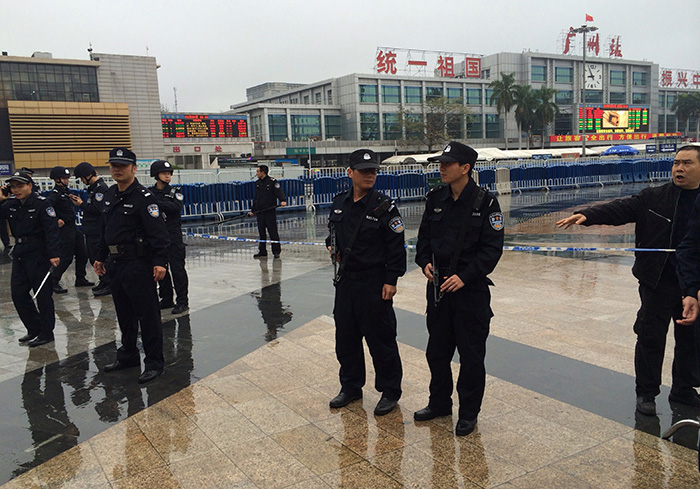 by Anadolu Agency Mar 06, 2015 12:00 am
Two assailants armed with knives wounded nine civilians and one policeman Friday morning at a railway station in southern China before police shot one dead and apprehended the other, according to local media.

One suspect died at the scene, while the other also sustained injuries.

Chen Huichao, an officer whose left thumb was injured in the attack, told Xinhua he had fired three shots at the assailants and a colleague had fired five shots.

"A suspect was running from the exit of the railway station and chasing a woman and child who fell on the ground," he said. "It was really dangerous and we were afraid we would hurt the woman and innocents."

He added that while the suspect was injured, the woman and child were unharmed.

The wounded suspect and civilians were transported to a military hospital in Guangzhou.

Four of the injured civilians were still undergoing emergency treatment as of 11.30 a.m., while the five others and the suspect were in stable condition, Xinhua reported, citing hospital officials.

A police investigation is ongoing with the identities of the attackers yet to be determined.

The incident was the second knife attack at a Guangzhou train station within a year, after an assailant wounded six people last May.