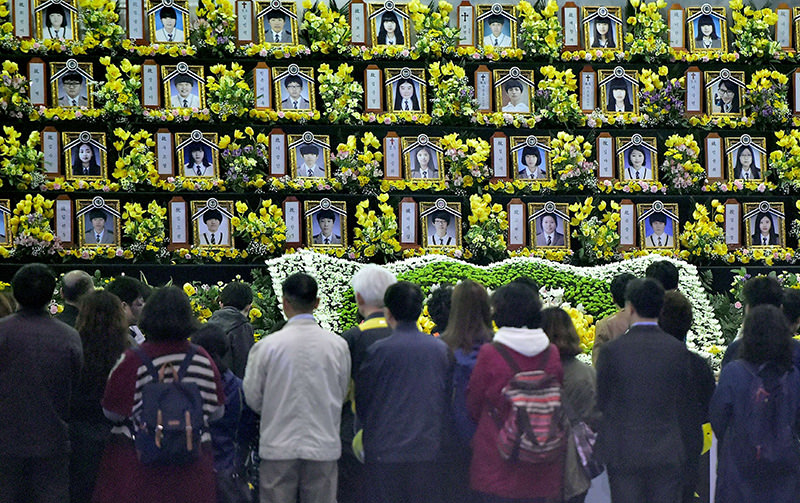 People pay a tribute at a group memorial altar for the victims of the sunken South Korean ferry Sewol at a remembrance hall in Ansan on April 16, 2015 (AFP Photo)
by Daily Sabah with Agencies Apr 16, 2015 12:00 am
South Korea commemorated the victims of last year's Sewol ferry disaster on Thursday, which killed more than 300 people, most of them schoolchildren, as weeping relatives mourned for their loved ones and accused officials of indifference to the tragedy.

Bowing to a key demand of the victims' families, President Park Geun-Hye used the anniversary to announce that the 6,825-tonne vessel would be brought to the surface at "the earliest possible date".

Park made the statement during a visit to the southern island of Jindo, the closest landfall to the site where the Sewol sank on April 16.

Family members - still angry over the official response to the disaster - declined to meet her, and there was no immediate response from the relatives to the announcement that the ferry would be raised.

The focus of Thursday's anniversary was on Ansan city, south of Seoul, where a single high school lost 250 students when the ferry went down.

Flags flew at half mast and yellow ribbons fluttered from trees and lamp posts as sirens blared across the city at 10:00 am (0100 GMT) and residents bowed their heads for a minute's silence and prayer.

Despite heavy rain, a steady stream of mourners passed through the memorial hall in Ansan, containing hundreds of black-ribboned, flower-ringed portraits of the dead students.

The Sewol sank on April 16, 2014 on the way from Incheon to Jeju Island. Of the 476 on board, just 172 survived and rescuers recovered 295 bodies, with the remaining nine missing presumed dead.

The chief executive of the ferry's operator was sentenced for 10 years in November on a manslaughter conviction, for remodelling the vessel and overloading it to make more money.
Last Update: Apr 16, 2015 11:16 am
RELATED TOPICS