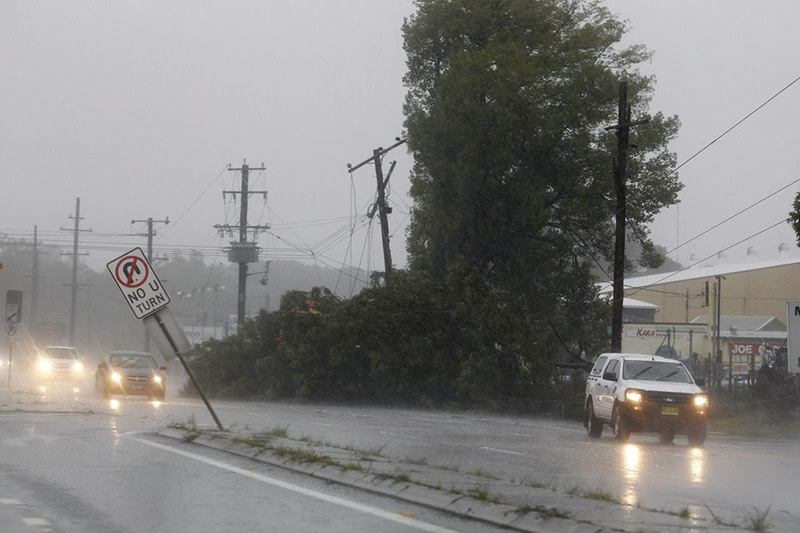 | EPA Photo
by Daily Sabah with Agencies Apr 21, 2015 12:00 am
A cyclonic storm lashed Australian state of New South Wales on Tuesday, washing away houses, cutting power to more than 200,000 homes and stranding a cruise ship off the coast in mountainous seas.

The Bureau of Meteorology said 119 millimeters (five inches) of rain had fallen in Sydney in 24 hours -- nearly a month's worth of rain.

Cyclone-strength winds of up to 135 kph (85 mph) uprooted trees, some crushing cars, snapped power poles and tore off roofs and building awnings.

Dozens of flights were delayed and at least one cruise ship found itself stuck at sea outside Sydney Harbour while huge waves, reaching 11.2 metres (33 feet) offshore, pounded beaches. Rail links to the north and south of Sydney were cut and many roads in Australia's largest city were flooded.

"We are calling for bosses to be flexible, people to make arrangements in an orderly way to start to head home ASAP," Baird told a news conference.

"It is a huge storm event that is wreaking havoc across NSW at the moment. Again, what our priority has to be at the moment is to get through the next few hours and protect life at every opportunity," he said.

A woman and two men were found dead on Tuesday in the town of Dungog, one of the worst-hit areas about 200 kms (125 miles) north of Sydney, police said. Media reports described them as elderly and said they were trapped in their homes as floodwaters rose.

"We've got a lot of low-lying houses in the township near rivers and unfortunately a lot of those houses have gone under," Dungog Shire community centre manager Sarah U'Brien told the Australian Broadcasting Corp.

The NSW State Emergency Service (SES) said it had received more than 4,500 calls for help and had to carry out 19 flood rescues. Three hospitals were without power and had to rely on generators and some 45 schools were closed.

The destructive storm which was sitting just off the coast just north of Sydney whipped up giant seas that closed many beaches, including world-famous Bondi Beach.

The wild weather closed Sydney Harbour to commercial shipping, forcing a cruise ship with some 2,500 passengers to wait off the coast, battered by big swells.

The weather is expected to worsen later on Tuesday before finally easing on Wednesday.
Last Update: Apr 21, 2015 3:00 pm
RELATED TOPICS