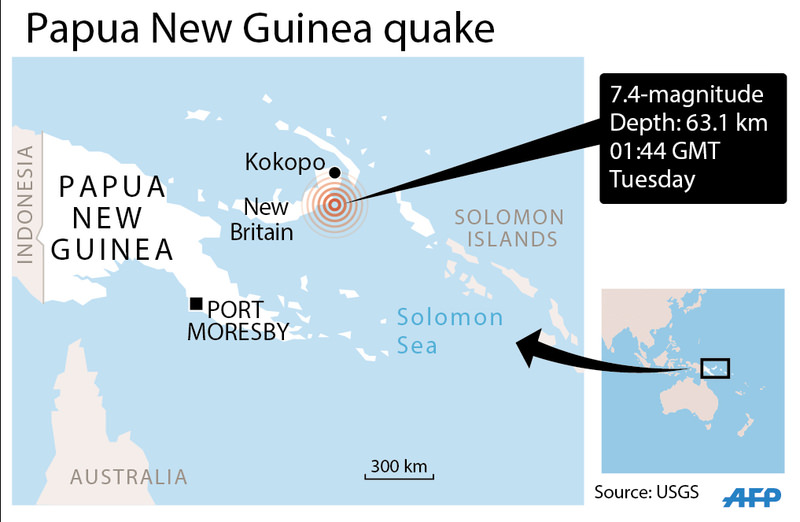 | AFP Photo
by May 05, 2015 12:00 am
A 7.4 magnitude earthquake struck off Papua New Guinea on Tuesday, sending frightened residents fleeing from their homes, but a threatened tsunami passed without incident, seismologists said.

The quake struck 133 kilometres (83 miles) south-southwest of the town of Kokopo in the New Britain region at a depth of 63 kilometres, the US Geological Survey said, and was followed by a 5.9 magnitude aftershock.

The Pacific Tsunami Warning Center initially warned that "hazardous tsunami waves" were possible but in a later update said "the tsunami threat has now mostly passed".

Mathew Moihoi, a seismologist at the PNG Geophysical Observatory, said the latest quake followed a series of seismic activity in the region in recent weeks but there had been no reports of major damage to buildings or infrastructure.

"Some things fell off the shelves," he told AFP.

Annette Sete, who lives in Kokopo, said there had been powerful tremors recently "but this latest one was big".

"Schools shut and kids sent home, many homes had the interiors turned upside down. A number of power lines down and trees fallen but no reports of casualties yet," she said.

Zenia Lopez, a worker at the Kokopo Village Resort, said she and her colleagues ran outside when the quake struck, but there was no damage to their resort.

"It was frightening, we all ran outside, but the place is okay, there is no damage," she said.

A receptionist at the Seaview Beach Resort in Kokopo added to AFP before the phone line cut off that "we felt the earth shaking" but that "everything was okay".

The quake hit in the remote New Britain area near Rabaul, but Moihoi said he did not think it was related to an active volcano some 110 kilometres away.

"Right now, we think it's tectonic in origin," he said. "Whether it develops a flow-on effect... we just don't know right now."

Kokopo, the capital of East New Britain, has a population of around 20,000. It started to grow after Rabaul was flattened by volcanic eruptions in 1994.

Last week, a 6.8 earthquake hit off Kokopo after a 6.7 tremor struck off the same area on Thursday. There was no reported damage.

Geoscience Australia senior seismologist Jonathan Bathgate told AFP the region had been very active recently and noted that a 7.7 magnitude earthquake occurred on March 30, generating a local tsunami. Again, there was no major damage reported.

"We can't predict earthquakes but this area is in a very active sequence. This could be the biggest earthquake that's been building up over the last few months, but there could be another larger earthquake," Bathgate added.

"We now could endure a series of aftershocks... but it doesn't rule out the potential for a larger earthquake."

New Britain, the largest island of the Bismarck Archipelago, is east of mainland New Guinea and has a population of around 500,000 people.

It lies on the 4,000-kilometre-long Pacific Australia plate, which forms part of the "Ring of Fire", a hotspot for seismic activity due to friction between tectonic plates.

In 2013, neighbouring Solomon Islands were hit by a devastating tsunami after an 8.0-magnitude earthquake rattled the region, leaving at least 10 people dead and thousands homeless after buildings were destroyed.