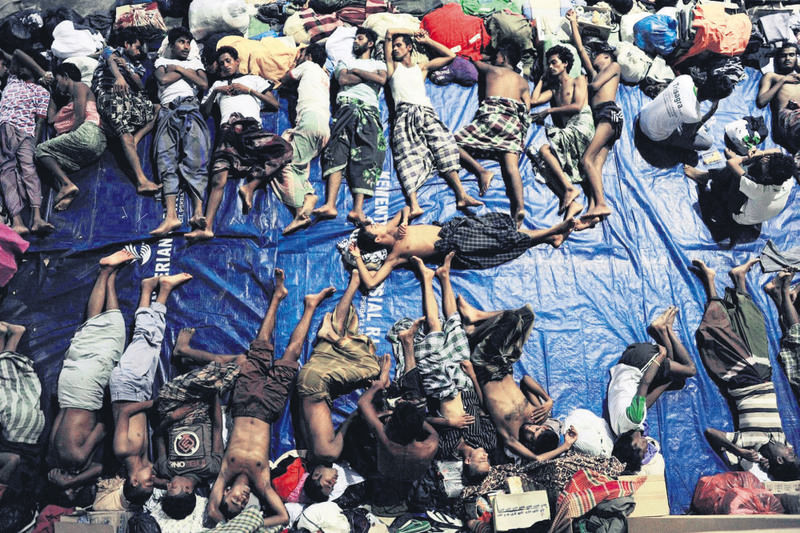 A group of rescued mostly Rohingya migrants from Myanmar and Bangladesh, sleeping at an Indonesian government sports auditorium in Lhoksukon in Aceh province.
by Daily Sabah with Wires May 12, 2015 12:00 am

Without effective search and rescue operations by South Asian governments, the number of Rohingyas who flee persecution and end up stranded at sea without food or water is increasing

While Europe is dealing with its own migrant crisis in the Mediterranean, hundreds of starving Rohingya migrants were in need of urgent rescue after they were abandoned by smugglers on a boat in waters believed to be near Thailand and Malaysia. A ship carrying hundreds of Rohingya Muslims sent out a distress call asking to be rescued, saying they were abandoned by the captain without fuel and have been without food or water for three days. Chris Lewa, director of the Arakan Project, which has been monitoring the movement of fleeing Rohingyas for more than a decade, said she spoke by phone with one of the migrants on board the Thai vessel Tuesday. She said there are about 350 people on board, mostly from Myanmar's troubled state of Rakhine and that they can see the shore, but are not exactly sure where they are.

The International Organization for Migration (IOM) has expressed fears for the many thousands of Rohingyas and Bangladeshis it says have been left stranded at sea at the hands of human smugglers. Around 2,000 of the migrants have sailed on rickety boats to the shores of Indonesia and Malaysia since last Saturday. "Our biggest concern is the 8,000 migrants who are unable to land on shore," Jeff Labovitz, the IOM chief of mission for Thailand, told Anadolu Agency on Tuesday. "We know the longer they are at sea, the more their health will degrade. They suffer from vitamin deficiency and will soon look like skeletons. Beriberi is a major concern," he said.

Rohingya Muslims have long been subjected to severe discrimination and violence under the Burmese dictatorship. The violent surge of Buddhist nationalism against minority Muslim communities in the state of Rakhine in Myanmar makes them the victims of political and religious extremism. Rohingyas are a Muslim ethnic group who are not recognized among the 134 official ethnicities of Myanmar, nor are they recognized as citizens of Myanmar because the government authorities see them as illegal immigrants from neighboring Bangladesh. They suffer from statelessness as they are deprived of the right to nationality. As the community is not living under the protection of any state, their living conditions are worsening and they have long struggled with persecution and growing Buddhist resentment. As they have no permission to leave the camps built for them, most are unemployed, have no source of income and have to rely on the World Food Program to survive.

The U.N. considers Rohingyas to be one of the most persecuted minorities in the world. Despite many families having lived in Myanmar for generations, government authorities still consider them to be illegal immigrants from neighboring Bangladesh. The unrest in Myanmar sparked in 2012 cost many Muslims their lives. About 140,000 stateless Rohingyas were placed in internal displacement camps due to the increasing violent attacks on them. The nationalist 969 Movement, which led to the spread of violence against Muslims in the country, forced many to live in camps with poor conditions. As Myanmar's Buddhist-Rohingya ethnic divide has escalated, reports suggest many Rohingyas who sought refuge in neighboring Thailand and Bangladesh have died.
Last Update: May 13, 2015 10:27 am
RELATED TOPICS