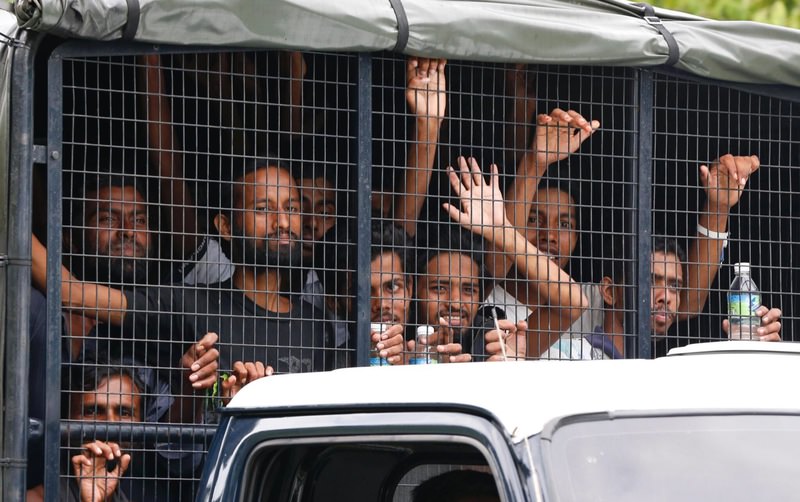 by Daily Sabah with AP May 14, 2015 12:00 am
Malaysia has turned away a boat carrying more than 500 Rohingya Muslims and Bangladeshis after providing them with fuel and provisions, a government official said on Thursday.

The boat was found on Wednesday off the coast of northern Penang state, just three days after more than a thousand refugees landed in nearby Langkawi island.

"What do you expect us to do? We have been very nice to the people who broke into our border. We have treated them humanely but they cannot be flooding our shores like this," he said.

"We have to send the right message that they are not welcome here," he added.

Thousands of migrants are still believed stranded in the Malacca Strait and surrounding waters, after captains tied to trafficking networks abandoned ships, leaving behind their human cargo.

Indonesia, which has taken 600, also turned a boat away earlier this week. But a foreign ministry spokesman denied Wednesday it had a "push back" policy, saying the Malaysian-bound vessel strayed into its waters by accident.

Malaysia, which is not a signatory of international conventions on refugees, is host to more than 150,000 refugees and asylum seekers. The majority of those immigrants are from Myanmar, and more than 45,000 of them are Rohingyas, according to the U.N. refugee agency.

Southeast Asia, which for years tried to quietly ignore the plight of Myanmar's 1.3 million Rohingya, now finds itself caught in a spiraling humanitarian crisis that in many ways it helped create.

In the last three years, more than 100,000 members of the Muslim minority have boarded ships, fleeing persecution, according to the U.N. refugee agency.

But no countries want them, fearing that accepting a few would result in an unstoppable flow of poor, uneducated migrants. But governments at the same time respected the wishes of Myanmar at regional gatherings, avoiding discussions of state-sponsored discrimination against the Rohingya.

Denied citizenship by national law, the Muslims are effectively stateless. They have for years faced attacks by the military and extremist Buddhist mobs. They have limited access to education or adequate health care and cannot move around freely.

Phil Robertson, deputy Asia director at Human Rights Watch, said Thailand, Malaysia and Indonesia have worsened the Rohingya crisis "with cold-hearted policies to push back this new wave of boat people that puts thousands of lives at risk."

"The Thai, Malaysia and Indonesian navies should stop playing a three-way game of human ping pong, and instead should work together to rescue all those on these ill-fated boats," he said in a statement Thursday.

Increasingly over the years, Rohingya boarding boats in the Bay of Bengal have been joined by neighboring Bangladeshi, most of them seeking an escape from poverty.

For those fleeing, the first stop, until recently, was Thailand, where migrants were held in jungle camps until their families could raise hefty ransoms so they could continue onward. Recent security crackdowns forced the smugglers to change tactics, instead holding people on large ships parked offshore.

Initially they were shuttled to shore in groups on smaller boats after their "ransoms" were paid. But as agents and brokers on land got spooked by arrests - not just of traffickers but also police and politicians - they went into hiding.

That created a bottleneck, with migrants stuck on boats for weeks, even months.

Chris Lewa of the non-profit Arakan Project estimates as many as 6,000 may still be on boats, waiting to find a chance to land or hoping to be rescued. Several international agencies consider her figures to be the most reliable.

In recent days, captains have started abandoning their ships, leaving passengers to fend for themselves, survivors say.

The United Nations has pleaded for countries in the region to keep their arms open and help rescue those stranded. Several navies said they were scouring the seas.

Wan Junaidi said the home ministry will soon call for a meeting with diplomats from Bangladesh and Myanmar, as well as from developed countries, including the United States and the European Union to urge them to take in U.N. refugees in Malaysia waiting to resettle to third countries.

"We want to tell the source countries that they must tell their people back home that Malaysia cannot welcome them," he said.

"We also want to tell other countries not to blame Malaysia. Open your doors and take these refugees in. Don't be selective," he said.