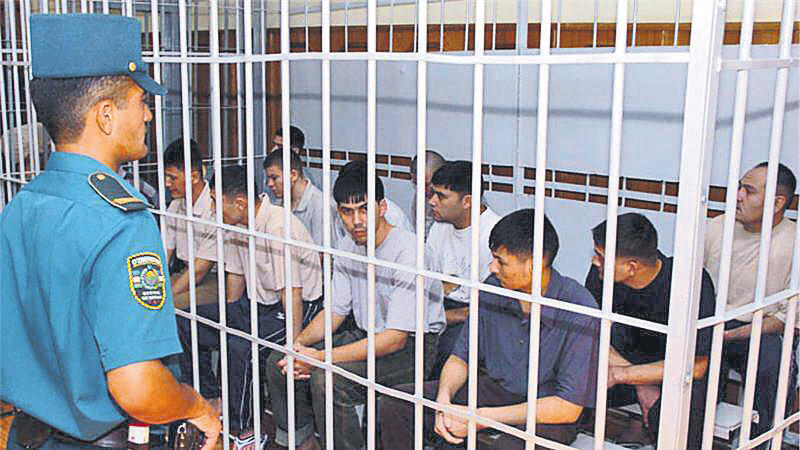 by Daily Sabah May 15, 2015 12:00 am
The Uzbek government's abuse of human rights, opposition activists, journalists and the religious who have been imprisoned on politically motivated charges in order to enforce its repressive rule, has drawn global criticism. Nongovernmental organizations in Turkey including the Free Uzbekistan Platform, Union of Uzbeks, Union of Tatars, International Rabia Platforms and lawyers from the International Refugee Rights Association and human rights activists held the 4th International Free Uzbekistan Forum to discuss human rights abuses in Uzbekistan in the Üsküdar Bağlarbaşı Culture Center, one of the most famous convention centers in Istanbul. Human rights groups also made a statement to the press in front of the Uzbek consulate before the forum in Istanbul.

The Uzbek government views various Islamic movements as a serious threat. On May 13, 2015, Uzbekistan's security forces shot dead hundreds of unarmed protestors demonstrating for better economic opportunities and political freedom in the eastern city of Andijan, the informal capital of the fertile and overpopulated Ferghana Valley, an area of early Islamic influence in Central Asia. Uzbek security forces fired machine guns into the crowd above the square without warning. Surrounded, protesters were unable to escape and troops blocked off the square and opened fire, killing and wounding unarmed civilians en masse. According to some estimates, as many as 1,500 people were killed in the Andijan Massacre. The government has announced the official death toll as 187, although authorities refused to allow an independent investigation. Uzbek President Islom Karimov's main political opponent, Muhammed Solih, who ran against him in the 1991 election and now lives in Turkey, said: "The bodies were buried in mass graves holding 15 to 20 people each, or were thrown into the Karasu River after the Andijan Massacre. The Chinese and Russian governments' support for the Uzbek government allowed it to avoid an international investigation. Organizers of the Andijan rally should have contacted me and other exiled Uzbek opposition leaders to work out a unified plan against Karimov's government." One of the reporters of the Forum 18, a human rights organization based in Norway, was detained and deported by the authorities at Tashkent airport in August 2005.

The massacre in Andijan initially attracted widespread international condemnation. The U.N., EU, U.S., the Organization for Security and Cooperation in Europe (OSCE) and NATO condemned the response by Uzbek security forces and called for an independent international investigation into the events, demanding unhindered access. After the Uzbek government adamantly rejected these calls and refused to cooperate with the international community, the EU imposed sanctions on Uzbekistan, including an EU-wide visa ban for high-ranking officials "directly responsible for the indiscriminate and disproportionate use of force in Andijan" and an embargo on arms exports to the country.

After the 2005 revolt against Karimov's iron-fisted rule, crackdowns on Muslims continue unabated. Muslim Uzbeks convicted of anti-government activity are regularly tortured and often die in Uzbek jails. Karimov, who has been in power for 26 years, was re-elected in March in an uncontested presidential election. Regime clampdown on Muslims considered radical, opposition figures, and businessmen makes Uzbekistan one of the world's most repressive countries. About 12,500 political prisoners are subjected to systematic torture. Some 150 religious Uzbeks, including 14 women, were sentenced to jail on charges related to extremism or anti-constitutional activity last year. According to reports by the Initiative Group of Independent Human Rights Defenders of Uzbekistan (IGIHRD), at least 23 people were tortured to death in prison in 2014. The actual number could be much higher because the victims' families fear contacting human rights groups or independent reporters.

The U.N. Committee against Torture has said that torture is carried out "systematically" by law enforcement officers in Uzbekistan's police stations, prisons and detention facilities run by the National Security Services (SNB). And yet, despite abuses, the U.S. and EU countries seem to have a blind-spot when it comes to Uzbekistan. In October 2009, the EU embargo was lifted without mention of the lack of an investigation into Andijan. Security, political and military interests are placed ahead of meaningful action to pressure this strategically important country to respect human rights.
Last Update: May 15, 2015 9:34 pm
RELATED TOPICS