Around 800 Rohingya rescued in Indonesia, many others remain on the sea 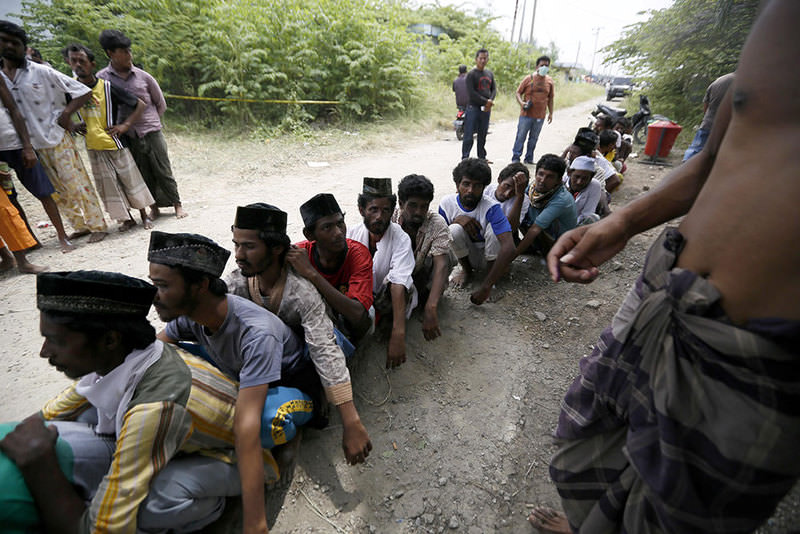 The migrants, believed to be mostly of the Rohingya Muslims ethnic group from Myanmar and Bangladesh, were initially prevented from reaching the shore pending a consultation with the Indonesian Foreign Ministry, military spokesman Fuad Basya said.

However, because their boat was about to sink off Aceh province, local fishermen and marine police moved to rescue the migrants and took them to the Kuala Langsa port in Aceh's Langsa city.

"Our job is to prevent undocumented ships from entering our territory, but if it is a humanitarian situation we will help," Fuad said.

Langsa police chief Sunarya Sik said the boat was crowded, and passengers were jostling when fishermen spotted the vessel.

"According to information from the migrants, they had entered Malaysian waters, but Malaysian security authorities turned them away," the police chief was quoted as saying by news website Tempo.co.

Indonesia is not a party to the 1951 United Nations refugee convention but in the past has sheltered migrants pending verification of their refugee status by UN refugee agency UNHCR.

The military said it towed a migrant boat Monday out of Indonesian waters, insisting that the migrants intended to go to Malaysia.

Nearly 600 Bangladeshis and Rohingyas were rescued from another boat Sunday off Aceh.

"This is an issue of international and regional importance," he said. "We are in contact with all relevant parties with whom we share the desire to find a solution to this crisis."

Malaysia's Maritime Enforcement Agency beefed up patrols to prevent migrants from entering the country, after more than 1,000 Rohingya and Bangladeshi boat people landed this week on the northern island of Langkawi.

One of the vessels was escorted out of Malaysian waters while the other - which suffered damage - was undergoing repairs before it would be sent back to its point of origin.

Thai authorities on Friday turned back a boat thought to be carrying hundreds of Rohingya migrants from Myanmar.

The Thai Navy spotted a boat late Thursday off the south-west coast, and towed the vessel back out to sea after giving the migrants food, water and medicine, the Bangkok Post reported.

"About 10 people died during the journey," one of person on the boat shouted in Rohingya to a boat of reporters that drew alongside. "We threw their bodies into the water."

The policy of pushing migrant boats back out to sea is putting the lives of migrants at serious risk, said Zeid Ra'ad al-Hussein, UN high commissioner for human rights. He said such practices were "incomprehensible and inhumane" and would "inevitably lead to many avoidable deaths."

In Washington, White House spokesman Eric Schultz called the situation "heartbreaking" and said the US would continue to pressure the Myanmar government to address the crisis.

US President Barack Obama raised concerns about ethnic minorities when he visited Myanmar last year, after the US resumed ties with the country, in the wake of a restoration of civilian rule.

"The reforms that are happening in Burma are important, are significant, but the process isn't done," Schultz said. "The United States is going to continue to raise concerns with that government and underscore the urgent need to fulfil that government's commitment to respecting these human rights."

Zeid said the Bangladeshi and Rohingya migrants need protection: "Just because they have taken to boats, does not mean they forfeit the human rights afforded to every human being under international law."

Some 920 mostly people from the Muslim Rohingya minority in Myanmar died between September and March in the Bay of Bengal, according to the UN rights chief's office.

Thailand has proposed temporary camps for migrants on its territory, but would wait until a May 29 regional meeting because Bangkok "cannot go it alone," a security advisor to the government was quoted as saying.

Thousands of Rohingya, a stateless Muslim minority in predominately Buddhist Myanmar, travel each month through Thailand to reach Muslim-majority Malaysia or Indonesia.