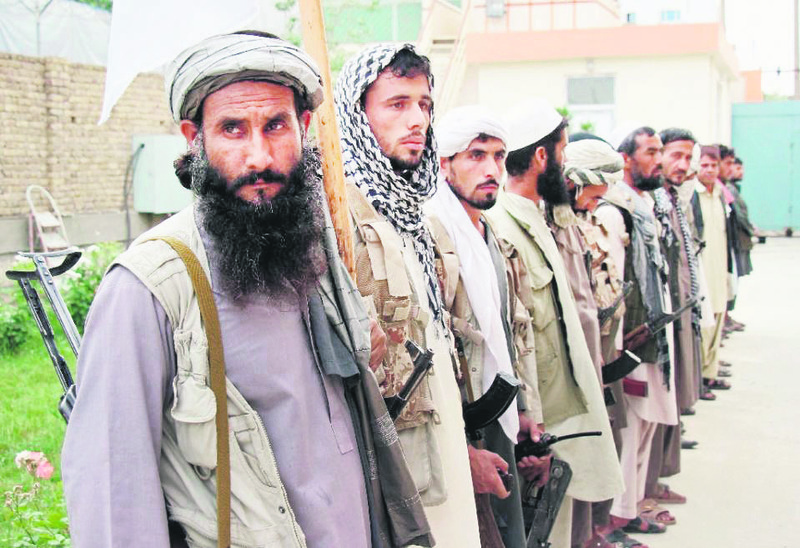 by French Press Agency - AFP
May 17, 2015 12:00 am
Russia has deployed hundreds of troops for drills in Central Asia with its ex-Soviet allies in a show of force as anxiety grows over a surge in fighting in neighboring Afghanistan. Around 2,500 personnel from the Russian-led Collective Security Treaty Organization (CSTO) are taking part in joint exercises due to run to Wednesday in Tajikistan. The move is seen as re-enforcing Moscow's role as the main guarantor of the fragile region's security after U.S. troops leave Afghanistan. The Russian deployment of about 500 troops for the drills started last week, bolstered by soldiers from Tajikistan, Kazakhstan, Kyrgyzstan, Armenia and Belarus. Tajikistan is in a strategic spot, bordering Afghanistan's Kunduz province where over 200 people have died and 10,000 been displaced by a militant offensive. Russia's foreign ministry says it is "particularly concerned" by the violence, which Afghan local authorities claim has seen the Taliban link up with militants from the Islamic State of Iraq and al-Sham (ISIS) battling in Syria and Iraq.

The uptick in Afghan fighting has rattled Moscow's ex-Soviet allies in Central Asia, and some have looked towards Russia for reassurance. Tajikistan hosts a Russian military base and has called for Moscow to step up its military assistance to the country. It is the only CSTO member of the three Central Asian states bordering Afghanistan, which also include Uzbekistan and Turkmenistan. The Kremlin and its partners in Central Asia have been accused in the past of exaggerating a post-Washington "spillover" effect in the region. But some experts argue states such as Tajikistan and Turkmenistan would be unable to contain a hypothetical breakout of fighting in Afghanistan's fractious northern provinces without significant outside help. "The armed forces of many of these states are critically weak with thoroughly corrupted command structures," Vasily Kashin, an expert at the Center for Analysis of Strategies and Technologies in Moscow, told AFP. "One moderate incursion could be devastating. Russia would have no choice other than swift military intervention." Tajikistan on Friday said it had stopped issuing foreigners travel permits for a remote region along the Afghan frontier, citing heavy fighting on the other side of the border.

At present there are just under 10,000 U.S. troops stationed in Afghanistan. While Afghan leader Ashraf Ghani secured a pledge from President Barack Obama in March to slow down scheduled withdrawals for 2015, the United States remains committed to pulling out all but 1,000 troops by the end of 2016. Yet even though the region has major concerns about the conflict in Afghanistan, some countries have shunned the opportunity to be part of the CSTO bloc, which is often associated with Moscow's divide-and-rule policies in Central Asia.

Uzbekistan, a country of 30 million which has a short border of around 140 kilometers with Afghanistan, quit the bloc in 2012. "Stability in Uzbekistan means stability in Central Asia," said Rafik Sayfullin, a political analyst based in the Uzbek capital Tashkent and a former member of the state's security council. "If Russia is interested in this, why does it practically give away tanks to Kyrgyzstan and Tajikistan and sell them for twice the price to Uzbekistan?" In closed-off Turkmenistan, which like Uzbekistan has turned to China and the West as well as Russia to upgrade its military, a defense official rebuffed rumors. Ashgabat had appealed to Russia or other foreign partners to help guard its border with Afghanistan. "Any activities of the security services of Turkmenistan are strictly connected with the country's permanently neutral status," the official told AFP on condition of anonymity. "Turkmenistan can receive military aid from any country, but never troop reinforcements," the official said.

Springtime attacks have become an annual strategy for the Taliban and other militant Afghan groups opposed to the U.S.-backed regime in Kabul. But claims that fighters from ISIS is also terrorizing the country, made by Afghan officials but yet to be confirmed by ISIS itself, could complicate the threat emanating from Afghanistan, said Deidre Tynan, regional project director for the International Crisis Group. While the Shanghai Cooperation Organization, which includes China as well as Russia, is "growing more active" in Central Asia, the CSTO remains the "foremost security bloc in the region," according to Tynan. "So far the CSTO has talked a lot without really doing that much," the analyst said. "It remains to be seen how it would handle a crisis from over the border in Afghanistan if one were to occur."
Last Update: May 17, 2015 9:33 pm