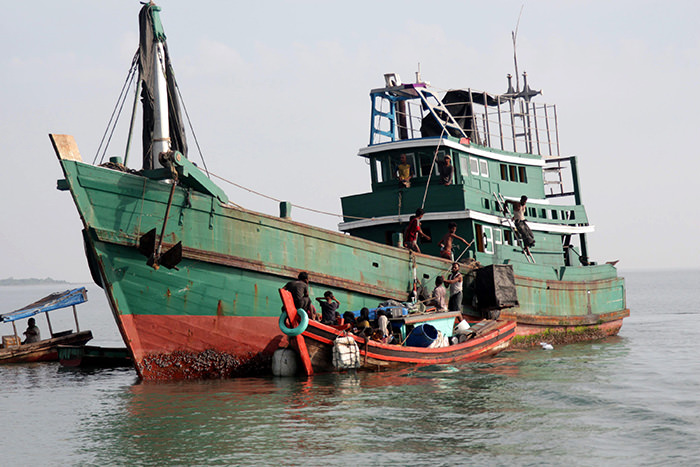 Malaysia and Indonesia have agreed to allow 7,000 Rohingya and Bangladeshi migrants stuck at sea to land temporarily. No solid solution to end the human tragedy has yet been provided by Myanmar

With Southeast Asia's migrant crisis is far from over, Malaysia and Indonesia have said they will allow thousands of boat migrants from Myanmar and Bangladesh to come ashore amid growing international pressure to end migrant tragedies on the Andaman Sea. The countries' joint decision was welcomed by the U.N. High Commissioner for Refugees (UNHCR), which said that the cooperation between the three countries is "vital for the purpose of saving" thousands of refugees and migrants stranded in boats in the Bay of Bengal and off the coast of Southeast Asia while calling for further international action to save lives.

According to Bay of Bengal crossing statistics released by the International Organization for Migration (IOM), the total number of migrants confirmed landed since May 4 hit 3,200. Reportedly, 1,395 of them landed in Indonesia and 1,158 in Malaysia. It is estimated that around 4,000 migrants from Bangladesh and Myanmar are still at sea waiting to be rescued.

The Malaysian and Indonesian ministers of foreign affairs made the announcement after talks, also attended by Thailand, over how to deal with the stranded migrants, mostly from the persecuted Rohingya minority in Myanmar. "Indonesia and Malaysia agreed to continue to provide humanitarian assistance to those 7,000 irregular migrants still at sea," Malaysian Minister of Foreign Affairs Anifah Aman said alongside his Indonesian counterpart Retno Marsude. "We also agreed to offer them temporary shelter provided that the resettlement and repatriation process will be done in one year by the international community," he added after the meeting near Kuala Lumpur.

Indonesia, Thailand and Malaysia are not signatories to the 1951 United Nations Refugee Convention that would oblige it to resettle a certain number of refugees.

The migrant crisis in Southeast Asia will continue unless the government of Myanmar can stop discriminatory policies and ethnic discrimination of Rohingya Muslims, who have fled the country due to violence. Prejudice against the minority group is widespread in Myanmar and many people refer to them as Bengali, a term suggesting they are illegal immigrants from Bangladesh despite having lived in the area for generations.

The United States called on "governments to identify and address the root causes of the [migrant] crisis" in a daily press briefing by the State Department. During U.S. President Barack Obama's last visit to Myanmar in November 2014, he called on the country's government to end discrimination of Rohingyas, urging in his strongest comments on the persecuted minority that the government grant them equal rights.

"[Rohingyas] face gross human rights violations by the state, we became victims of genocide for generations and were left to die in horrible makeshift camps in our own homeland without food, water and medicine supply from the government," Zafar Ahmad Abdul Ghani, president of the Myanmar Ethnic Rohingya Human Rights Organization in Malaysia said. "Due to the horrible situation we face in our homeland we take risks to flee the country to seek refuge in other countries," he said.

Since the crisis erupted in Myanmar in 2012, more than 125,000 Rohingyas have fled oppression in majority Buddhist Myanmar. The U.N. considers Rohingyas to be one of the most persecuted minorities in the world. Despite many families having lived in Myanmar for generations, government authorities still consider them illegal immigrants from neighboring Bangladesh. Rohingyas have long been subjected to severe discrimination and violence under the country's previous dictatorship. The violent surge of Buddhist nationalism against minority Muslim communities in the state of Rakhine in Myanma has led to both political and religious extremism. Rohingyas are a Muslim ethnic group who are not recognized among the 134 official ethnicities in Myanmar, nor are they recognized as citizens because the government considers them illegal immigrants from neighboring Bangladesh. They are victims of statelessness, deprived of the right to nationality.
Last Update: May 20, 2015 4:41 pm
RELATED TOPICS